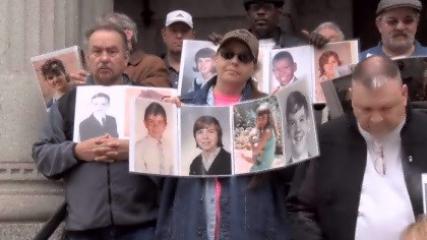 Seven hundred people gathered at the Hyatt in Downtown Milwaukee Friday evening for the St. Francis of Sales Seminary Dinner.

\"If it happens to fall on a day that we're scheduled in court, it's just a coincidence,\" said Archbishop Jerome

Tickets for the event cost $150.00 per person.  Organizers say the celebration is the largest fundraiser the seminary has ever had, with proceeds going to recruit and retain new priests, but it came just hours after the Milwaukee Archdioceses' bankruptcy hearing.

\"This is a time to express tremendous remorse,\" said Peter Isely, Midwest Director for the Survivors Network of Those Abused by Priests.

Isley says the annual fundraiser could not come at a worse time.

\"I'm a survivor,\" said Isley, \"I was sexually assaulted by a priest here in Wisconsin.\"

Isley says after the way survivors were treated by church leaders in court, there's little reason to celebrate.

\"There are victims that he's trying to throw out of court today, assaulted by some of the most well documented, most notorious, priest pedophiles, in this archdiocese,\" Isley explained.

Archbishop Jerome Listecki says despite the criticism, the Catholic community must move forward.

Listecki says it's important for the church to train better priests.

\"The church doesn't stop in doing its work and its mission,\" said Listecki, \"part of its mission is to produce priests, in order to assist our people in the parishes and also do the work of the church.\"

Isley says-- big fundraisers are not the solution.

\"The way you build a better priest, is to have those who are going to be priests, joining and reaching out with the victims of their fellow priests-- okay, that's what you do to bring justice to those who have been harmed,\" said Isley.

Event organizers emphasize seminary funds are separate from the archdiocese fund.  The next court date for the Archdiocese is set for October 22nd.