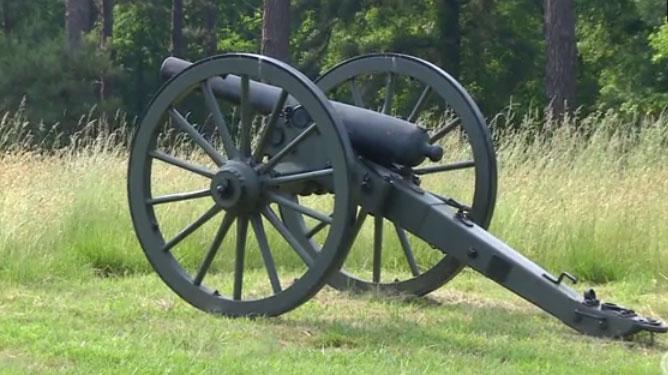 Authorities are investigating suspected looting at Petersburg National Battlefield, just south of Richmond, Virginia. The National Park Service describes Petersburg as the site of the war's longest siege, lasting more than nine months between 1864 and 1865 and claiming 70,000 lives.
"Earlier this week, one of the park employees was out doing landscape work and noticed some things were out of place," park spokesman Chris Bryce said.
The digging happened in the eastern part of the park, where there was a large number of excavated pits, officials said. "Many of the holes were just left open," Bryce said. "They were several inches deep in most cases."
Marked graves were not disturbed.
Park officials have not described what type of items or relics may have been targeted. They have not confirmed whether anything was removed.
"They are probably doing their homework of the area, probably did research on Civil War," Bryce said. "They were in the ground (and) they likely would have used a metal detector and a digging tool."
Civil War relics, including uniform buttons, rifle parts and other metallic battlefield items, regularly show up on Internet auction sites.
The park service says looting a federal battlefield is a crime, and violators can be fined as much as $20,000 and face two years in prison.
The siege of Petersburg is known as the longest military event of the Civil War, pitting Union Gen. Ulysses S. Grant against Confederate Gen. Robert E. Lee.
The Petersburg siege and battle over supply lines led to the eventual fall of the Confederate capital of Richmond and the surrender of the Confederacy.
In one of its most infamous battles, called The Crater, Union troops detonated a mine underneath a Confederate fortification.
But poorly led Union troops were repulsed after they rushed into the gap.
Grant called the Battle of the Crater "the saddest affair I have ever witnessed in war."
The excavations occurred where significant fighting took place in June 1864 and March 1865.
Bryce said Saturday he was unaware of any tips to authorities. Officials are hopeful someone saw something and will report it, he added.
This is not the first time people have done such excavations. Bryce said someone was successfully prosecuted in 2010.
"What really took us off guard was this being so close to Memorial Day, where the nation is in the midst of starting the summer and a weekend where we should reflect on sacrifices made."
Share this article: