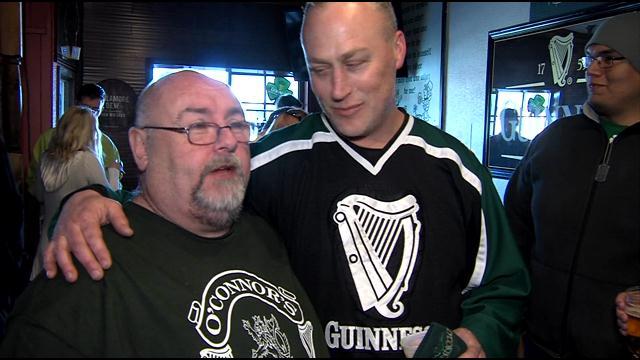 O'Connors is one of the select places on St. Patrick's Day that allows Derry musician Danny Brown, affectionately known as Danno from Derry, to sing his entire play list.

It's been that way for years now, so he makes a point of making sure he repays the kindness by never skipping the opportunity to do  gig or two at the cozy Irish themed restaurant and pub known for its perfect pint along Greenfield near 86th Street.

\"I can't sing these songs in my hometown,\" Danno told CBS 58 News. \"That's why I have to come here, thousands of miles away to West Allis.\"

Brown has a vast play list, all the tunes you expect that are filled with fun and adventure. But he also has a set of what are considered political songs that speak of the conflict in the northern six counties of Ireland that are part of the United Kingdom.

Some of the tunes draw parallels with the anti-apartheid movement in South Africa.

Pub owner Mike O'Connor says performers should have artistic freedom and that if patrons are inspired to learn more about Irish history, including the painful and difficult parts, then so be it.

\"I think he should be allowed to play what he wants,\" O'Connor told CBS 58's Michele McCormack . \"I think it's also important to pay tribute to the people who have died for what they believed in.\"

O'Connor and Brown say it doesn't seem right to cut certain songs out the show when the aim is to bring a little bit of several different regions, including the Republic of Ireland, to audiences.

They hope that by exposing Americans to all of the history they'll have a better understanding of why it's so important to support justice anywhere in the world where that's not happening.