City of Racine fights back against STD's 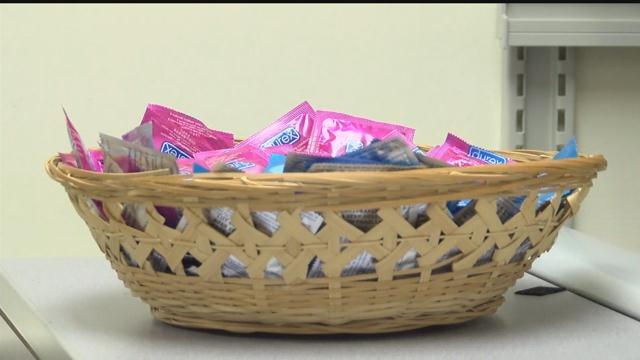 The health department in Racine is responding to a spike in sexually transmitted disease cases.  Because of that, condoms are being given away, and in some places you might not expect.

\"On average we see about 750 for chlamydia and 170 for gonorrhea and 15 new HIV cases on a yearly basis. That's smaller than the rate in Kenosha  and Milwaukee but still too high,\" said Dottie-Kay Bowersox.

Instead of just talking about it, the city is taking action, putting ads at movie theaters and on buses and doing something a little less traditional.

It's all free and Dottie-Kay Bowersox with the health department says In the meantime it makes sense to put baskets of condoms at local bars.

The health department wants to make safe sex as easy as closing a bar tab.

\"\"We can't be mad about it because we're promoting safe sex. That's a good message to send out,\" said bar manager Elise Schwartz.

\"When we talk about STD's people get embarrassed but it is what it is,\"  said Bowersox.

But it's not just your favorite bar. Restaurants and even salons like Ruth's Barbershop are getting involved.

\"Young and old have been picking them up,\" said Ruth, who owns the barbershop.

Ruth has gone through a whole jar in just a month and says this is a very good thing for Racine.

\"If it had happened a long time ago it would have been better yet,\" said Ruth.

The end goal is to lower Racine's STD rate by ten percent over the next 12 months.