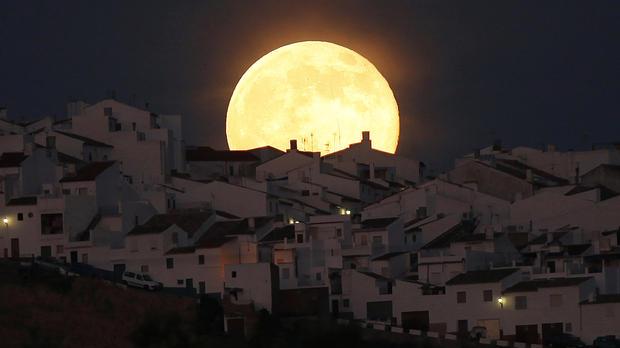 The twinkle of holiday lights brighten the neighborhoods, but this year, there's an extra treat in the sky. A rare Full Moon will occur on Christmas Day. The moon will peak at 5:11 A.M. in the predawn hours of Christmas morning before setting at 7:07 A.M. According to NASA, the last time this occurred was in 1977 when a full moon added an extra holiday gift. The December full moon is called the "Full Cold Moon" because it occurs during the beginning of winter. Folks in Wisconsin should be able to have a decent view of the sky with little cloud cover forecast into Friday morning.

Did you know, Earth's closest neighbor is thought to have formed when a Mars-size rock collided with Earth, stripping off the outer layers. The surface temperature fluctuates from roughly 300° F during the its two week daylight period to -270 F during the 2-week night. This is because there is not enough atmosphere to keep the Moon warm at night, nor protect it from the Sun's rays in the daytime. And with no magnetic field, your compass won't work. However, because there's no atmosphere, there's no wind or water erosion. That means the surface has been virtually unchanged over the last 3 billion years. The astronauts' footprint remain unchanged on the Moon's surface.

NASA's John Keller said in a statement from the space agency, "It's worth remembering that the moon is more than just a celestial neighbor." He adds that the history of the moon and Earth are intimately tied together, and Earth would be a dramatically different planet without the moon."  Scientists say the moon causes many of the tides in the Earth's oceans. This is because of the gravity force between the Earth and Moon. At full Moon and new Moon, the Sun, Earth and Moon are lined up, producing the higher than normal tides.  As a side note, when you gaze up at the Christmas moon, take note that NASA has a spacecraft currently orbiting Earth’s moon. NASA’s Lunar Reconnaissance Orbiter (LRO) mission has been investigating the lunar surface since 2009.