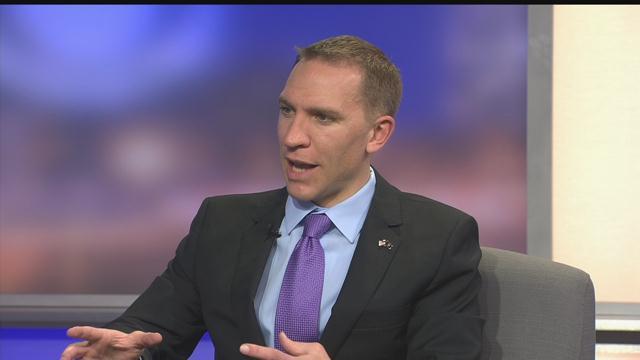 Chris Larson called the campaign tactics of incumbent Milwaukee County Executive Chris Abele "weird and crazy" during a live interview Wednesday on the CBS 58 News at 4.

Larson finished first in the primary. He and Abele will face off April 5th.

Top of the list for Larson is preserving the Mitchell Park Domes which were closed indefinitely by Abele after bits of concrete began to crumble exposing progressive deterioration of the Milwaukee landmark.

"I think we need to preserve the domes," Larson declared on CBS 58. "Today we found out there was a move to set dates certain when the domes would reopen and Abele refused to sign that. That should be concerning, considering he has given false numbers about attendance. How much money its losing and not committing to rebuilding."

Larson argues that attendance is actually up and based on his own preliminary investigation, he believes each dome can be rebuilt at $15 million each.

He says the burden doesn't have to fall solely on local property tax payers.

"I think we can get national funds to make it happen. We'll look at federal and state funds and look at the region for other people to jump in and help us. When we had the Bucks Arena deal, everybody was rushing to the table at triple the cost. I argue this is something a lot of our neighbors use. What we've put forward is not to put it on property taxes. But to shift it to a sales tax. So, people who are coming from outside the county pay in. It's the  1% sales tax that passed eight years ago."

It was then that Larson railed against a series of campaign commercials and fliers that he says have been circulating.

"My opponent is using crazy misleading adds. Using the same Scott Walker rhetoric that they ran when we passed it (the sales tax) the first time. I'm confident  neighbors understand that we need  dedicated funds to preserve our parks to actually plan for the long term future. I think they're done with the usual Scott walker style gimmicks where  you lie about saying you're not increasing taxes. When for Abele, taxes have gone up over 18 million and its all on property taxpayers."

He insists the words crazy and weird are not personal attacks. He says that's what he's hearing when he meets with voters.

"Abele is one of the richest people in town. It's clear form his adds that he has polls number that shows he's not winning. He's simultaneously trying to compare me with Bernie sanders and Scott Walker. He's trying to say we are both too liberal and too conservative to make a good county executive. He's throwing anything and everything at us. It's hard to understand where he's coming from. People are asking why am I getting  a mailer where  he's drawing hair and glasses on you. Is he running for third grade class president?"

Larson also refutes any notion that he's flip flopped when it comes to the Estabrook Dam..

As a county board member he voted for repairs. But says he's noticing a possible shift in public opinion.

"If the public opinion has shifted to tearing it down, I'm not sure. We'll have to do a public hearing."

Larson says if the public wants it done, his administration will get down by the end of the year.  While he attended a meeting the previous evening on the topic he said he didn't think it was the most pressing issue, even though it's getting a lot of attention.

Larson says his record as a supervisor shows he fought very hard for dedicated funding for our parks.

"We passed a referendum for 1%  sales tax., half for property tax relief ,but people wanted to commit to our parks. Unfortunately it hasn't happened. Our current county executive has continued the same strategy as Scott Walker."

Also on Wednesday, Larson issued a lengthy statement after social media erupted with complaints that he insulted fellow State Senator Lena Taylor. Taylor did acknowledge she was offended by comments that Larson made to her and were apparently overheard back on March 15th.

“I want to address rumors that have been circulating over the last several days regarding a conversation I had with a Senate colleague last week.
“Last Tuesday, as I was approaching the Senate chambers in the Capitol, I ran into Senator Taylor. She began yelling at me, which was followed by some heated words from both sides. “Since this conversation, we have made repeated attempts to meet with Senator Taylor to talk through and resolve our differences, then return our focus to moving Milwaukee County forward. We even reached out to one of my mentors, Congresswoman Gwen Moore to convene a meeting on neutral ground. “Despite my repeated offers to meet and the requests of Congresswoman Moore,
Senator Taylor has remained unavailable to meet with me. “It seems rather than having a straightforward conciliatory meeting, our brief
conversation is being used as a political distraction. Having her allies, like former Alderman Mike McGee, harass my campaign staff and volunteers, or disrupt important community events is simply uncalled for, especially given my repeated offers to sit down face to face and work through our differences."