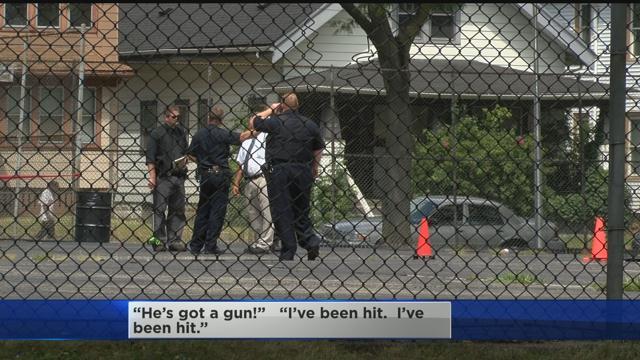 The scary scene started shortly after 1 PM Saturday afternoon when police say a 28-year-old man stole a Porsche from a car dealership employee while on a test drive in Glendale.

“Witnesses recall seeing the driver driving at a high rate of speed in the area of Good Hope Road approaching I-43, and at that time an officer from Glendale took up position on I-43 and Hampton to watch for the vehicle,” says Glendale Police Chief.

According to police, the officer attempted to stop the vehicle and the suspect kept going, “he gave chase to someone he knew was armed. When the suspect bailed out of the car, he continued to chase him. He knew he was armed. He confronted him.”

According to police, the suspect shot at the officer who returned fire wounding the suspect. The officer continued to chase until he apprehended him.

The officer is 36-years-old and a 13-year veteran on the force.

According to policy, the officer has been placed on administrative leave during the investigation.

Police say the suspect has a long criminal record as a minor and adult.

The suspect is now in Milwaukee police custody. MPD is investigating the officer-involved shooting.?