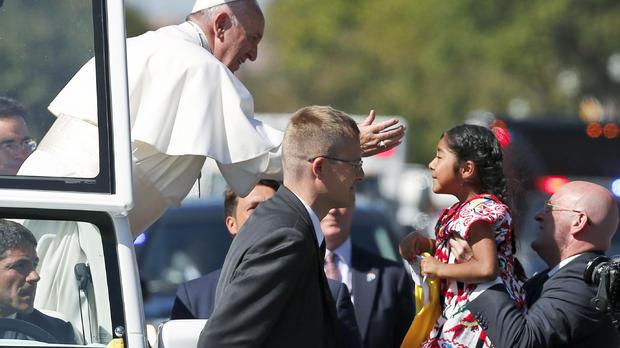 (CNN)During the motorcade on the National Mall, Pope Francis stopped to kiss babies and children. One young girl got through the barrier and handed the Pope a letter.

At first, security stopped her, but the Pope signaled for her to come over. The crowd cheered as a guard lifted her to the Pope.

Five-year-old Sophie Cruz from Los Angeles, writes: "Pope Francis, I want to tell you that my heart is sad, and I would like to ask you to speak with the President and the Congress in legalizing my parents because everyday I am scared that one day they will take them away from me.  All immigrants just like my dad need this country,"

Cruz describes herself as an "American citizen with Mexican roots." She says her parents immigrated from Oaxaca, Mexico.

Wednesday, which began with pomp and politics and ended with a controversial canonization, was the Pope's first full day in the United States. The 6-day visit will take him later this week to New York, where he will address the United Nations, and Philadelphia for the World Meeting of Families, a large Catholic event that is expected to draw nearly a million pilgrims to papal Masses.