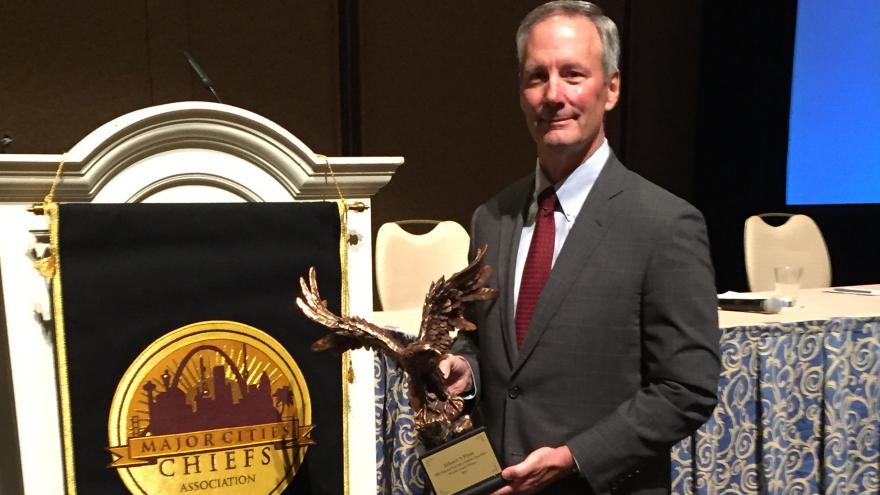 FBI National Executive Institute Associates President Charles Connolly announced that this year’s award is presented to Milwaukee Police Chief Edward A. Flynn. The Penrith Award is a unique honor given to a law enforcement executive who is selected by past recipients of this coveted award.

Chief Flynn’s career began over four decades ago in New Jersey, where he rose through the ranks of the Jersey City Police Department. He then went to Massachusetts where he led the Braintree and subsequently the Chelsea police departments. In Chelsea, he helped lead the city out of state-imposed receivership to status as an “All American City.” He then became the chief in Arlington County, Virginia where he led recovery efforts in the aftermath of the terrorist attack on the Pentagon, on September 11, 2001.

Mitt Romney, then-governor of Massachusetts, recruited Flynn to be his Secretary of Public Safety and Homeland Security in 2003. There he was responsible for a wide variety of agencies including the Department of Correction, the State Police, the Office of Emergency Management and the National Guard. He instituted several reforms and developed a regional homeland security structure that was a model for awarding grants. He was then appointed to be Police Commissioner in Springfield, Massachusetts, another city in state-imposed receivership, where he instituted several reforms before being recruited to serve in Milwaukee.

Chief Flynn has led the Milwaukee Police Department for over nine years and is the longest serving chief since 1984 and only the second “outsider” in its 162-year history. “During his tenure, MPD has received the International Association of Chiefs of Police highest award, has been recognized by the Problem Oriented Policing Institute and has achieved accreditation. It has also opened itself up to research conducted by several leading universities and think tanks while pioneering innovative programs to fight crime and engage with the community,” said President Connolly. He added, “Chief Flynn’s commitment to the highest standards of police professionalism, the application of research and the development of future leaders has been evidenced throughout his career and we are pleased to recognize him now.”

The Penrith Award is named in honor of a prominent Chicago businessman slain during an armed robbery. His son, Gary Penrith, a retired FBI Special Agent in Charge, is a past president of the FBI NEIA.