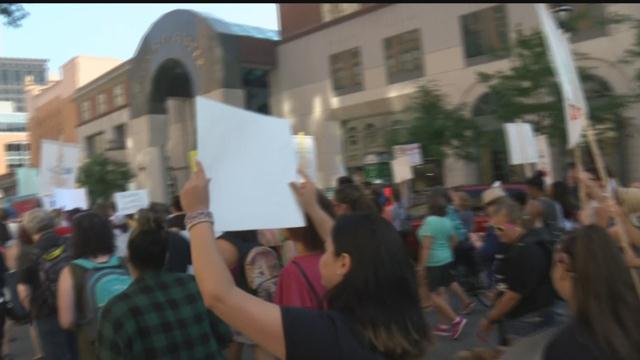 Nate Hamilton has planned a protest for the Coalition for Justice on Tuesday at 5:00 PM, and Milwaukee Police Chief has issued a statement in regards to the protest.

The Coalition for Justice had a protest yesterday that started at Red Arrow Park and marched to Wisconsin Avenue and then to Cathedral Square.

"We caution those who believe they are marching in a good cause to recognize that deviation from permitted routes of march puts other people at risk besides," said Chief Flynn.

The Milwaukee Police Department is committed to protecting the rights and safety of everyone. Our Department has demonstrated commitment to the protection of First Amendment rights by successfully policing dozens of demonstrations without significant incidents. This has been accomplished despite the fact that the majority of these protests were conducted without securing the appropriate permits.
In light of recent national events, the Milwaukee Police Department renews its commitment to protecting the right to protest. We recognize that protecting the right of those dissatisfied with the state of American policing is the ultimate test of our professionalism.
Policing a democracy is a constant balancing act between the rights of the many and the rights of the few. That balance is most challenging when the unfettered rights of the few create substantial risk of harm to law-abiding citizens.
The Milwaukee Police Department encourages those who are committed to continuing disruptive protests to abide by the law and to secure the necessary permits for occupation of parks or for defined routes of march in Downtown neighborhoods.
We caution those who believe they are marching in a good cause to recognize that deviation from permitted routes of march puts other people at risk besides
the marchers including those trapped in traffic jams and those on their way to essential business or personal emergencies. Most specifically, deviation from routes of march require a commitment of manpower hours from Milwaukee Police which draws significant police resources away from high crime neighborhoods and puts residents of those neighborhoods at significant risk of injury. It is no secret that our most disadvantaged neighborhoods are the very same areas most afflicted by high rates of violent crime. Those who would advocate for the residents of those neighborhoods by protesting must recognize their advocacy risks doing real harm.
MPD will continue to work with protest groups to ensure safe expression of their constitutional rights and we urge them to recognize their responsibility to society. As we balance these rights and responsibilities, it may be our reluctant duty to make arrests unless organizers take the appropriate steps to work with us to ensure everyone’s safety.