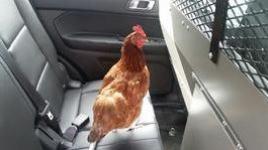 Authorities captured a chicken that ruffled rush-hour traffic on the Bay Bridge from Oakland to San Francisco.

The bird was snared Wednesday after the morning commute and put in a patrol car for a visit to a veterinarian.

CBS San Francisco reports the chicken was first spotted around 5:50 a.m., running in the carpool lane, but it was more than four hours before the California Highway Patrol was able to wrangle the bird.

During that time, officers and drivers ran in and out of traffic, as the chicken dodged people and cars. The Highway Patrol tweeted at 10:10 a.m. that the bird had been captured.