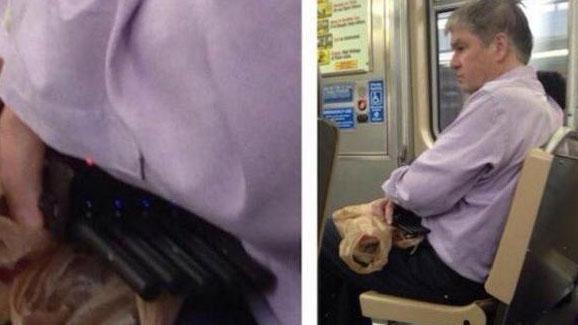 CHICAGO (CBS NEWS)--A Chicago man was charged Tuesday with using an illegal cellphone-jamming device while riding the CTA, according to CBS Chicago.

Wearing a ball cap and casual business attire, Dennis Nicholl, a 63-year-old certified public accountant, was charged with a felony for using the signal-jamming gadget. The station reported that wasn't the first time he was caught, either, and numerous complaints about the dropped calls had already raised suspicions.

Rider Keegan Goudie said the device "stuck out like a sore thumb" to the extent that he and his brother blogged about it on thesixthirty.com after spotting it on the Red Line.

"He seemed to be up to no good," Chas said. "It seemed like this device was something he shouldn't have his hands on."

Cellphone jammers are sold online for anywhere between $30 and $300, according to the station. Federal law prohibits anyone from selling, buying or operating the devices, which block cell reception, as well as police radios and emergency calls.

For months, Chicago Police investigated complaints about dropped calls on the Red Line before a 911 caller flagged police about Nicholl. Undercover officers arrested him on a CTA platform Tuesday and he was charged with a felony.

"He had no malicious intent to really hurt anybody," said his attorney, Charles Lauer.

Lauer said Nicholl was just annoyed by all the people on their cell phones and used the jammer to get a little peace and quiet.

Perhaps. But according to the FCC, people who use cellphone jammers can face prison time and significant fines: $16,000 for each violation or as high as $112,000 for using the device only once.

Goudie said the capability was troubling in "in terms of security and terrorist threats in any major city..."