Chicago inmates who clapped for cop-killing suspect may face reprisals 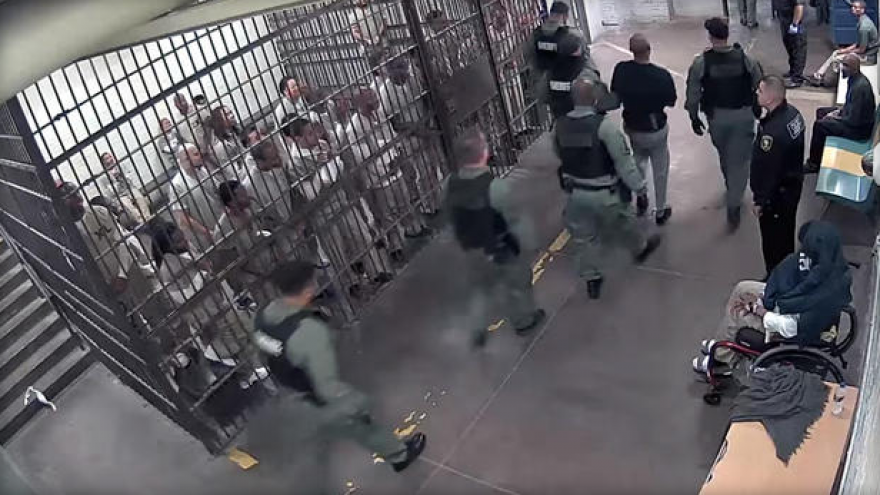 CHICAGO -- Five Cook County Jail inmates who applauded as the man charged with the fatal shooting of a Chicago police commander was led by their cell could face reprisals for their actions, a jail official said Friday. Cara Smith, the chief policy officer for Sheriff Tom Dart, said a security video shows them clapping as suspect Shomari Legghette was being led past a crowded holding cell on Thursday after his first court appearance.

The inmates were in the holding cell awaiting action on their cases. Legghette is charged with first-degree murder in Tuesday's shooting death of Commander Paul Bauer.

She said the five inmates were transferred overnight from Chicago to a jail in southern Illinois, where it will be more difficult for family and friends to visit them while they are in custody.

The jail also is forwarding to prosecutors the video and reports of the incident Thursday afternoon so they can use the information if the inmates are convicted, she said.

"The conduct that those detainees engaged in was disgraceful... and speaks to their character," Smith said. "We feel it should be considered by prosecutors in connection with their sentencing."

The video could be a "factor of aggravation" considered by a judge in sentencing.

But Steve Greenberg, a prominent Chicago defense attorney, said there is no way the inmates should be penalized for what he said is a clear exercise of their right to free speech.

"These inmates ... no matter how vile or disgusting you may think their expression is, they have an absolute right under the First Amendment to express those feelings and it is a violation of their rights as citizens to penalize them or consider that as aggravation," said Greenberg, who is not representing any of the men.

The video was taken moments after the 44-year-old Legghette appeared in court on charges of first-degree murder of a peace officer, armed violence, unlawful use of a weapon by a felon and possession of a controlled substance.

Police say they wanted to question Legghette Tuesday when he took off running and Bauer pursued him on foot. He caught Legghette near the James R. Thompson Center, a government building, where the two struggled and Legghette fell down the stairs. Bauer either fell or ran after him to a landing where, Legghette, wearing a bullet proof vest and armed with a semi-automatic handgun, allegedly shot the 53-year-old Bauer six times.

Bauer, a 31-year veteran of the police force, was pronounced dead a short time later.