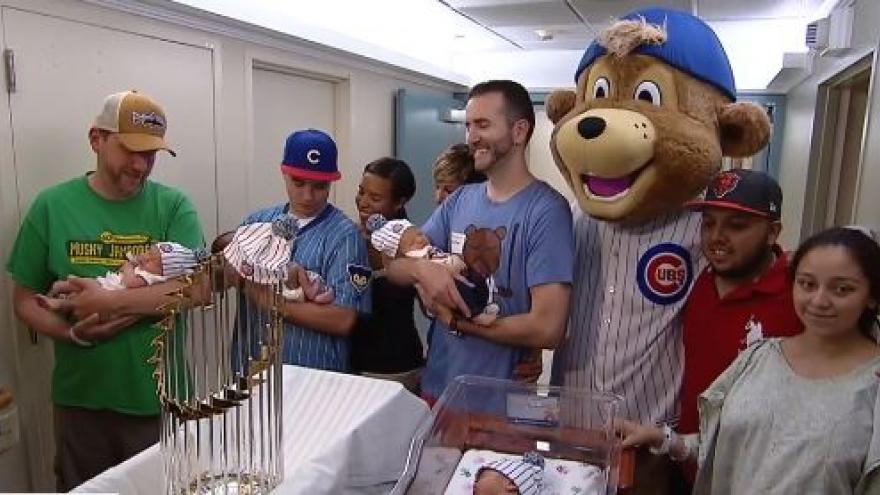 (CBSNews) Meet the youngest crop of Chicago Cubs fans, all born about nine months after the team's historic World Series win – you do the math.

Hospitals in Chicago are recording a surge in the number of births and the babies are being called Chicago's "World Series Babies." They could be given names like Ivey, Clarke and maybe even Wrigley.

Natalie and Joe Pelnar say they have the Cubs to thank for getting pregnant. They welcomed their baby boy Addison last week, named for the street outside Wrigley Field.

"We literally found out the day after the Cubs won the World Series we were pregnant. So it was like, we had two things to celebrate," Natalie said.

These babies were born at Advocate Illinois Masonic Medical Center, less than a mile from the team's legendary home.

The Cubs' mascot, Clark, visited the newborns with the commissioner's trophy and the World Series ring.

Asked when they think Theo was conceived, Erin said, "It was the night that the Cubs won the World Series. We had a lot of luck on our side and just the right amount of champagne."

OB-GYN Dr. Melissa Dennis said deliveries doubled earlier this month -- around when babies conceived during the World Series would have come to term.

"It was all hands on deck. It was a very busy time and of course babies tend to come either all at once or the most inopportune of times," Dennis said.

While we can't know for sure if the Chicago Cubs brought on this baby boom, for these new parents, the timing is a home run.