MILWAUKEE (CBS 58) -- Trying to curb reckless drivers who are terrorizing the Milwaukee-area. Michele Fiore is here to explain why a Chicago community activist is joining the fight.

Rev. Robin Hood says the way to reach the youth isn't through a jail sentence, it's with education and compassion -- and his organization is thinking outside the box.

"It's rough being in a neighborhood where you can't really cross the street. You got the Kia boys jumping out of cars," said Teresa Burnett, director of mental services for M.O.V.E.

"I see lots of posts on TikTok, Instagram, Snapchat of kids you know going out committing these crimes and kind of in a way glamorizing it on social media," said Tynetta Burnett, national director of youth operations for M.O.V.E.

"So a child is really innocent and they only go by learned behavior," said Rev. Robin Hood, founder of M.O.V.E.

Rev. Hood is coordinating a picnic at McGovern Park later this month, inviting parents to bring their children -- hoping the Kia boys, whose average age is 12, will be among them.

"We're hoping it makes a big difference because we have a lot of children who are out here committing crime when they should be, you know, being children," said Teresa Burnett.

"Sometimes they see, like they look at me and they see that I'm not into none of this stuff but I'm still like having fun," said Rashiya Hood, age 12 from Chicago.

The picnic is part of Rev. Hood's "Putting the Child Back In Children" campaign.

"And if we walk around thinking we're safe because we don't live in these neighborhoods, well then you might as well don't go to the mall, don't go to the store, don't drive across the country and don't drive a Kia or a Hyundai and guess what? They're stealing Dodge too," said Rev. Hood.

Trying to empower parents with resources to keep kids out of trouble.

"The reason we're doing this is to put the community back together," said Janiyah Burnett, age 10 from Milwaukee.

"They would be talking about like hey when I get older I want to be like a Hyundai boy or like a Kia boy and I'm just like moving as far away as I can," said Janiyah Burnett.

The "Putting the Child Back in Children" picnic, giving away school supplies and offering sound advice, will be held at McGovern Park from 11:00 a.m. - 3:00 p.m. on Saturday, Aug. 13. Here is a link to a survey that M.O.V.E. is sending out to the greater Milwaukee community. 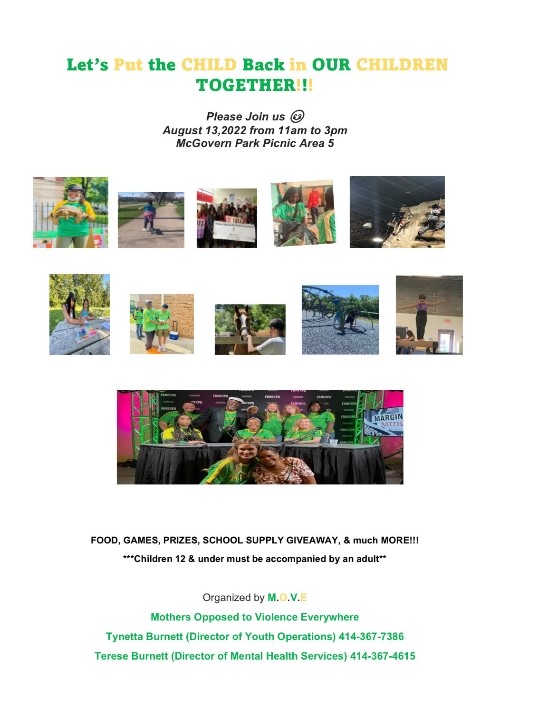