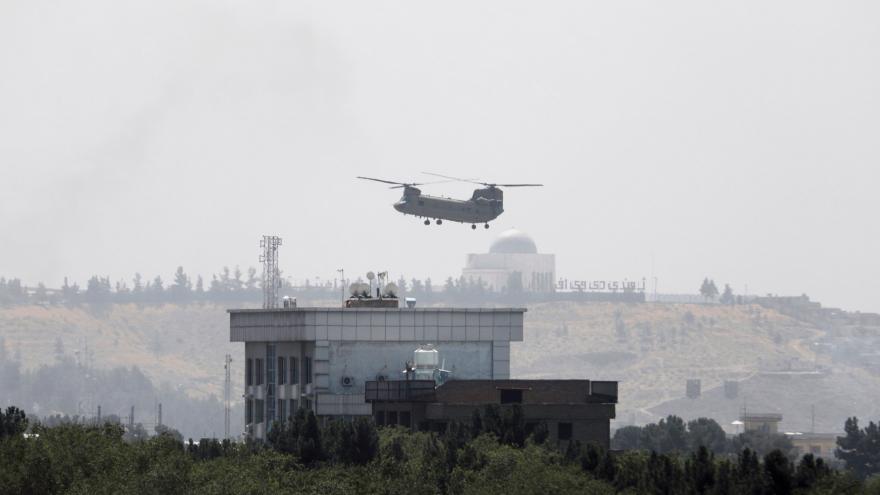 (CNN) -- Hundreds of people poured onto the tarmac at Kabul's international airport desperately seeking a route out of Afghanistan on Monday, after the Taliban's sudden seizure of power sparked a chaotic Western withdrawal and brought to a crashing end the United States' two-decade mission in the country.

Commercial flights at Hamid Karzai International Airport have been canceled, but footage there showed frenzied crowds trying to force their way onto any airplane leaving the city late on Sunday night and Monday morning.

Their pleas come as the US, the UK and other nations mount a hurried evacuation of embassy staff and nationals, in scenes echoing the Fall of Saigon 46 years ago. The US military is guarding a section of the airport, but its embassy in Kabul warned American citizens and Afghans not to travel there unless explicitly told to do so.

The sudden arrival of chaos in Kabul has taken many by surprise. US intelligence analysts had predicted it would likely take several more weeks before Afghanistan's civilian government in Kabul fell to Taliban fighters. But on Sunday, after encroaching towards the city, the militants took control of the presidential palace and Afghan President Ashraf Ghani fled the country.

Afghans now await reports of what kind of regime they will live under. Taliban spokesman Suhail Shaheen told CNN on Sunday that an announcement about the make-up of a new government will take place "as soon as possible," but it would be "premature" now to name who will be included.

The US defense secretary has meanwhile approved the deployment of 1,000 more American troops into the country due to the deteriorating security situation, a defense official told CNN, upping the number of troops in the country to 6,000. All US embassy staff have been evacuated and were at the airport on Sunday night, the State Department said.

Astonishing footage from the site showed people trying to board aircraft as they took off and landed, some even clinging to the sides of planes that were taxiing the runway. Several C-17 transport planes have been seen leaving, while the Turkish government said a flight it organized had departed. In the UK, the first flight carrying British nationals and embassy staff arrived home on Sunday night.

Witnesses CNN has spoken with at the airport say they have heard many gunshots fired throughout the day on Monday. It's unclear if the shots were fired at people or just into the air to disperse crowds, or by whom, the witnesses said.

One of the witnesses CNN spoke with is hoping to get on a flight out of Afghanistan, fearing persecution at the hands of the Taliban when the Americans leave. At one point, the witness managed to get inside the airport, where they saw US soldiers telling Afghans to "stay back."

"The US need to take us with them. Once they're gone we will be left behind forever," the witness said.

President Joe Biden is expected to address the American people on Afghanistan in the next few days, according to a senior administration official. The crisis is already threatening to engulf Biden's young presidency, and Secretary of State Antony Blinken said to CNN on Sunday that the administration had miscalculated how rapidly Kabul would fall.

"The fact of the matter is we've seen that that force has been unable to defend the country," Blinken told CNN's Jake Tapper on "State of the Union," referring to Afghanistan's national security forces. "And that has happened more quickly than we anticipated."

There are questions too among the US' allies about the nature of their withdrawal of troops from the country, which precipitated the Taliban's surge.

The UK's Defense Secretary Ben Wallace fought back tears in an interview Monday, admitting that "some people won't get back" from the country. "It's sad and the West has done what it's done," he said.