Round two of snow has crossed the Mississippi River and will move through southeast Wisconsin after midnight. 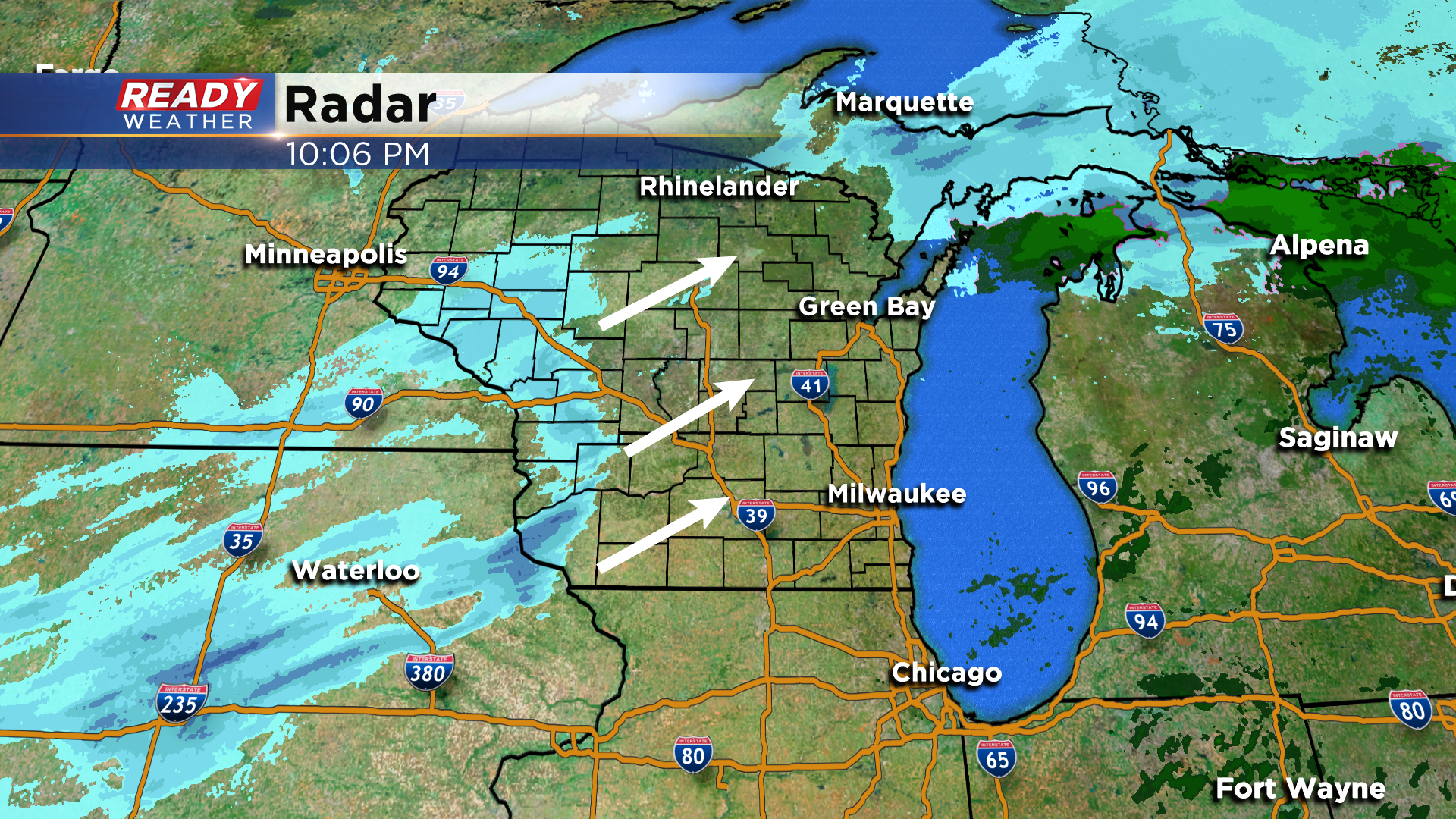 The brunt of the snow will move through between 1am - 4am, tapering off by sunrise besides a stray snow shower or two near the WI/IL border. 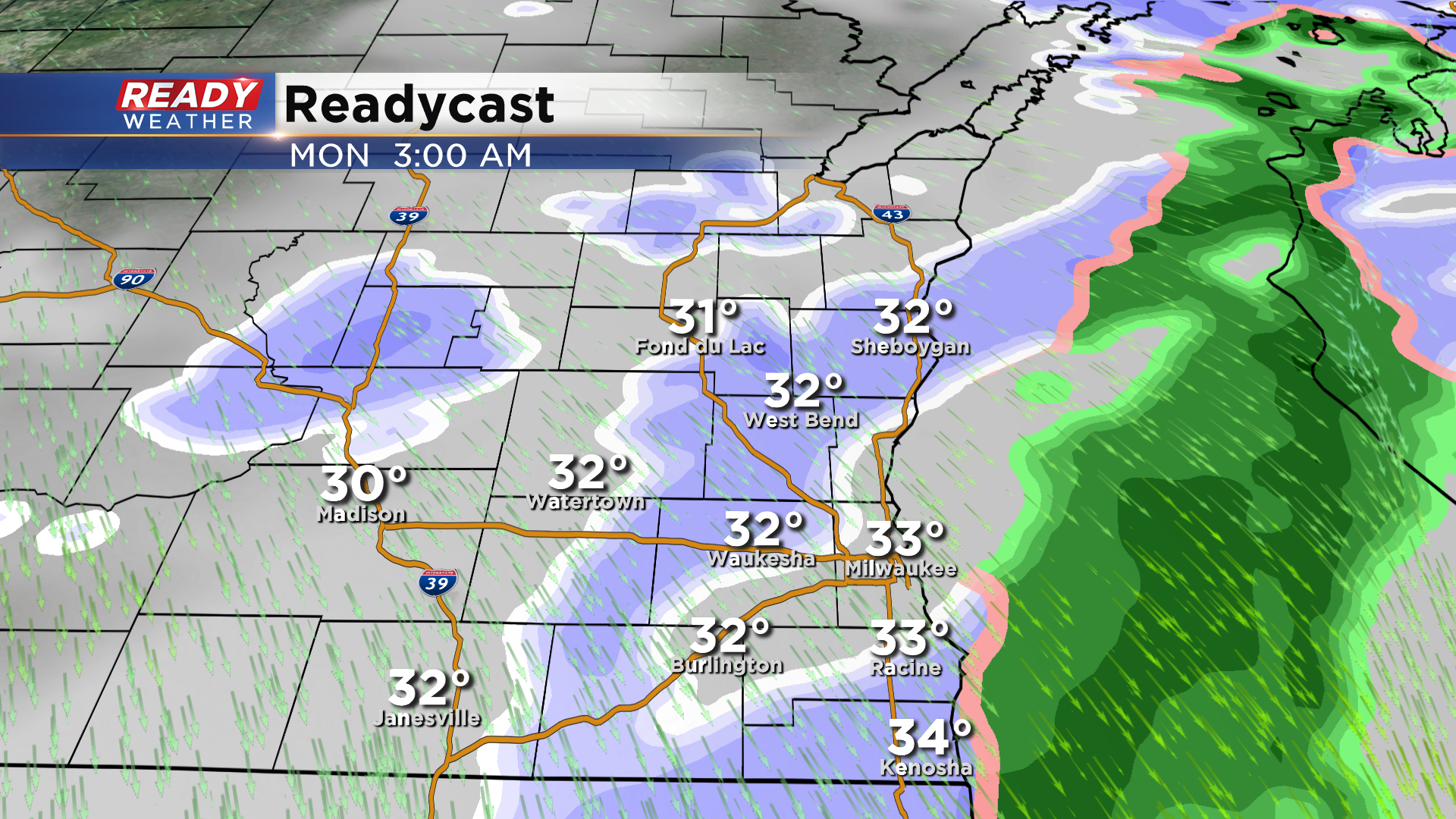 A light coating of snow is possible on the grass and cold, elevated surfaces. While the snow is expected to melt on roads, temps will be below freeze everywhere besides the lakeshore, so there could be some slippery spots on the roads Monday morning before temps rise above freezing mid morning.

The first batch of snow has, for the most part, moved out of southeast Wisconsin. The exception being the far northwestern portions of Dodge and Fond du Lac counties where a bit of light snow continues. 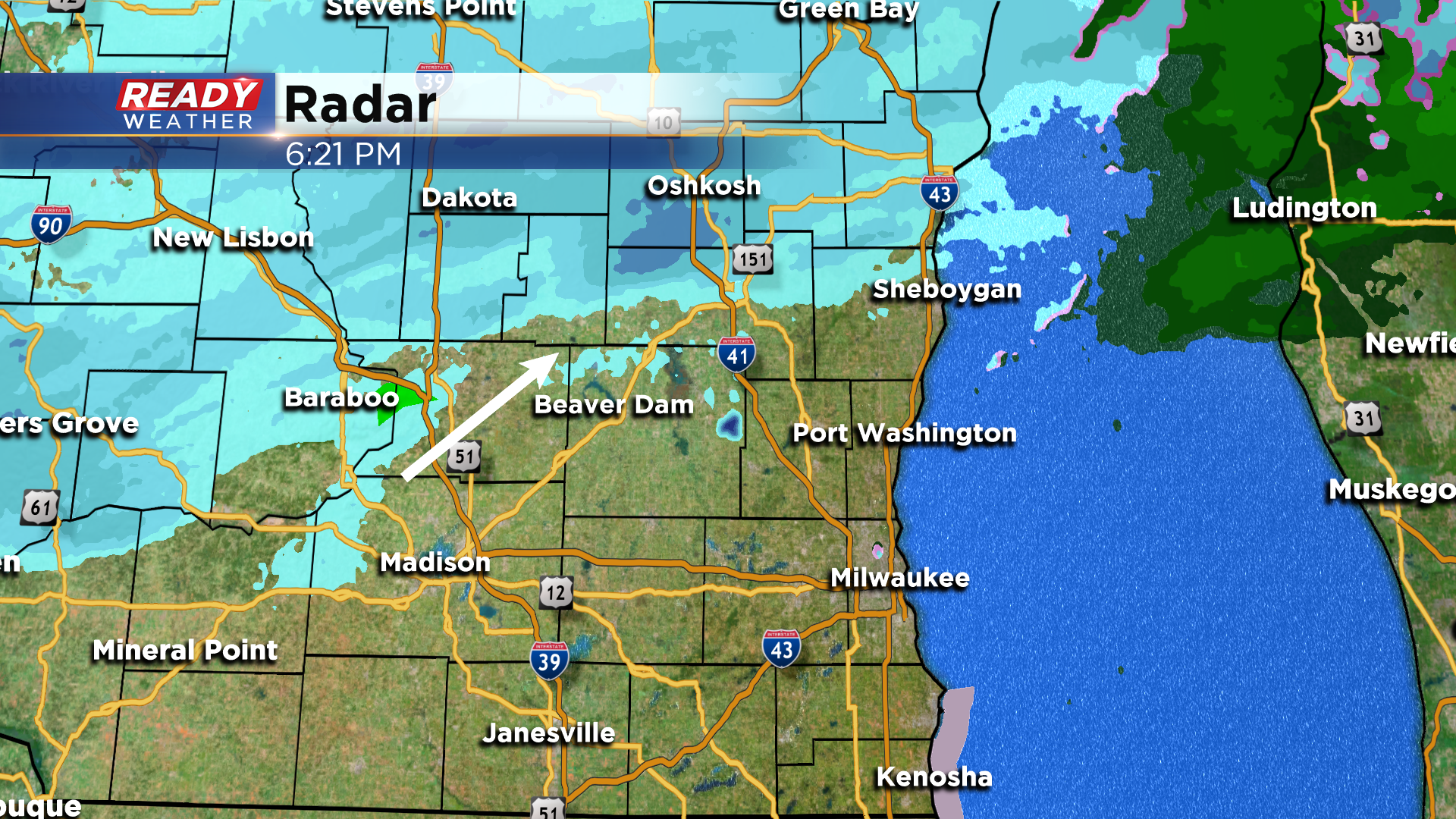 A few light snow showers may continues to impact these areas this evening, otherwise the rest of us will be primarily dry for the next few hours. However, the next round of light snow is taking shape near Omaha, and will start to work into the area closer to midnight. 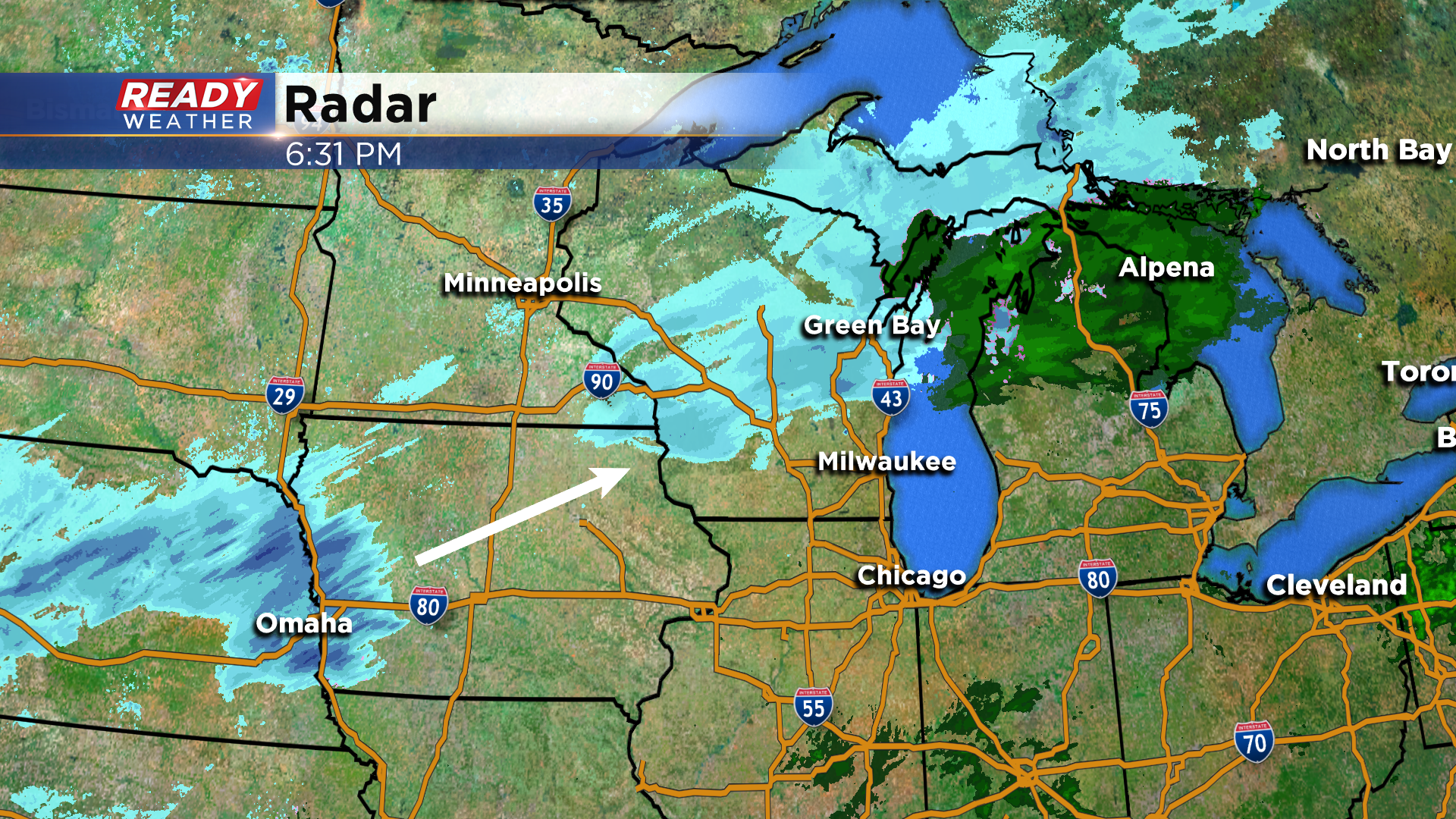 That batch of snow will be a bit more patchy by the time is moves through the area overnight. There may still be a lingering snow shower or two between 7-9am south of I-94, but after 9 am we'll turn dry and stay that way for the rest of the week. 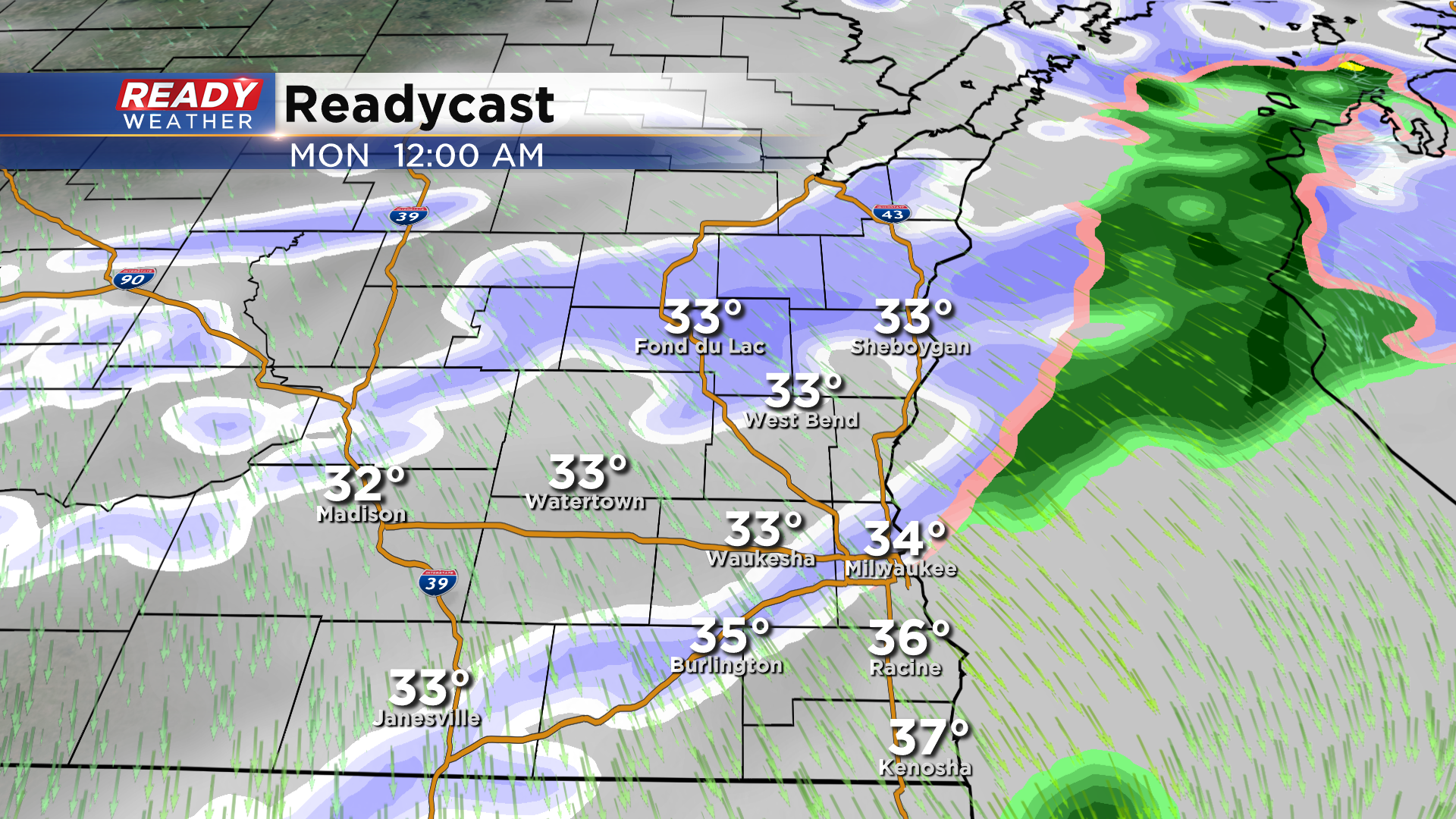 Despite the warmer temperatures this afternoon, snow was the main precipitation type that fell, including near the lakeshore. As temperatures continue to cool overnight, light snow will be the primarily precipitation type. There was a minor dusting on the grass in Dodge and Fond du Lac counties with the first round of snow. By the time the snow ends, there could be a coating of snow on the grass in these northern locations. 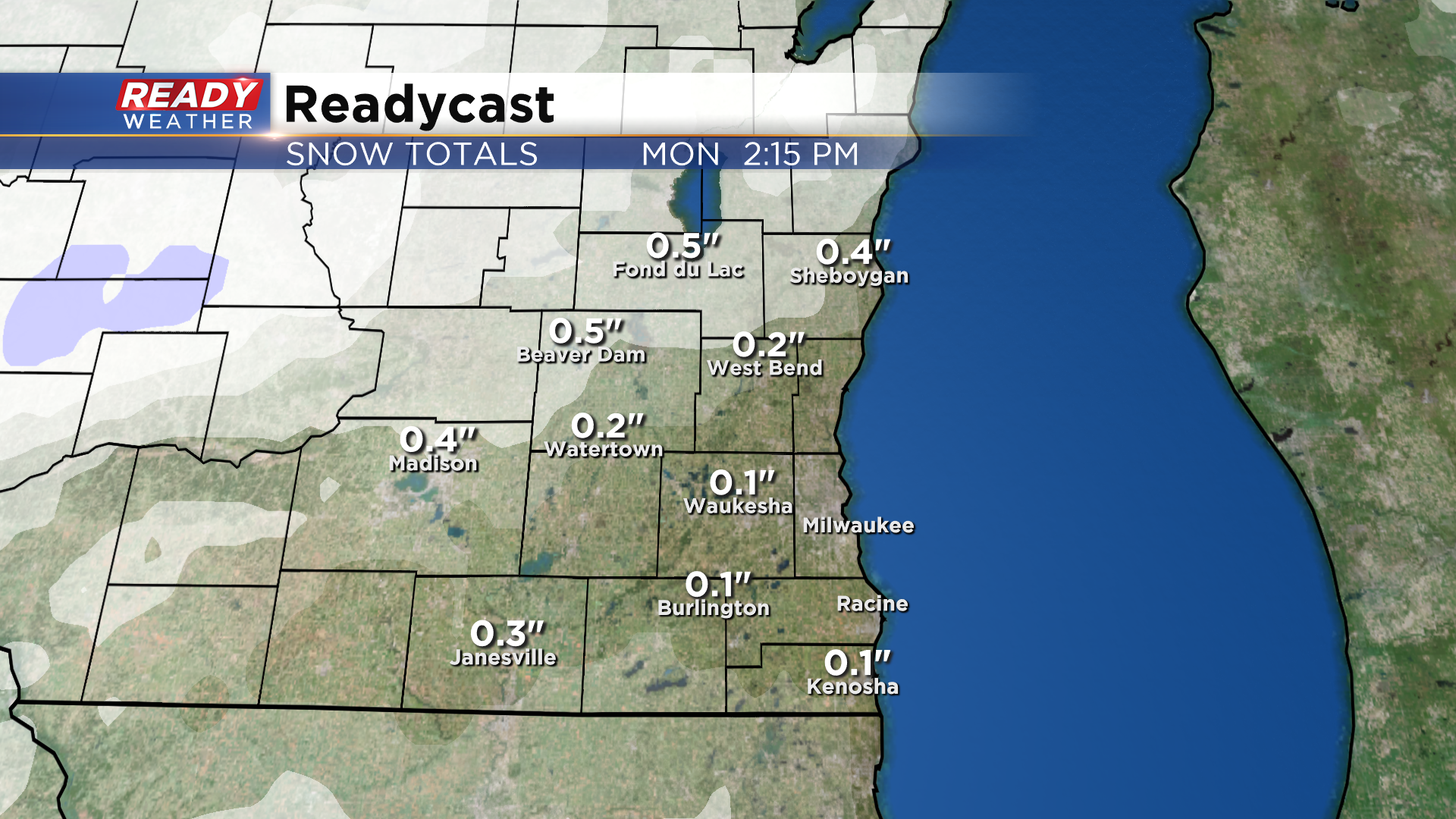 Roads will be too warm for snow accumulation, however slippery spots are possible during the Monday morning commute, especially away from the lake where temps will be below freezing for few hours.

A band of wet snow has been able to overcome the dry air near Watertown, Juneau, and Beaver Dam as of 3pm. This has cooled temperatures into the mid 30s in these locations. This band of wet snow will continue to track northeast into Washington, Sheboygan, and Ozaukee counties and reduce visibility. 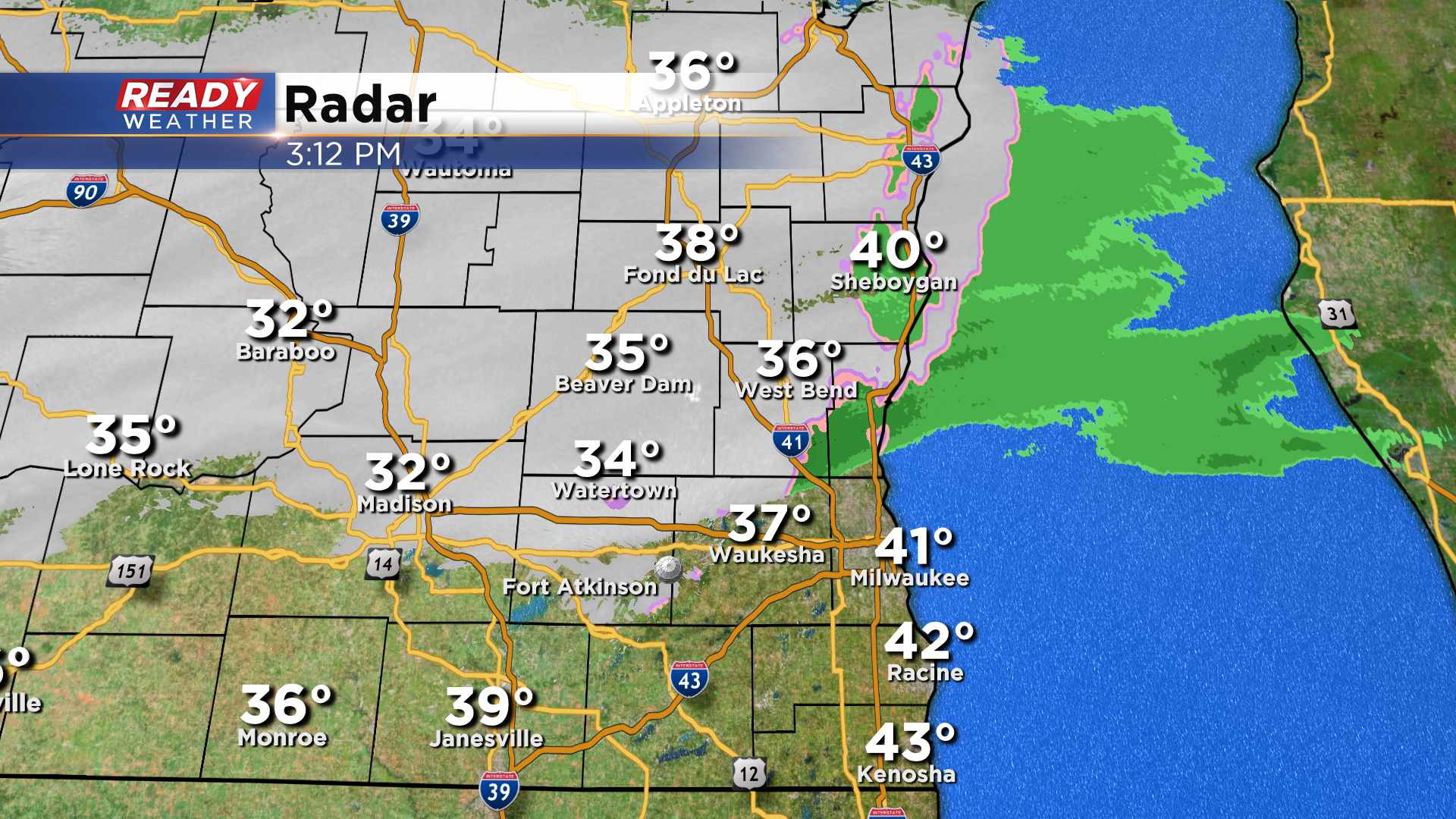 Wet snow and rain will continue to fall north of I-94 as we head into the evening, with more rain than snow closer to the lake where temperatures are in the low 40s.

It's been a cloudy and chilly start to our Sunday with temperatures in the upper 30s to low 40s lakeside and low to mid 30s inland as of mid morning. 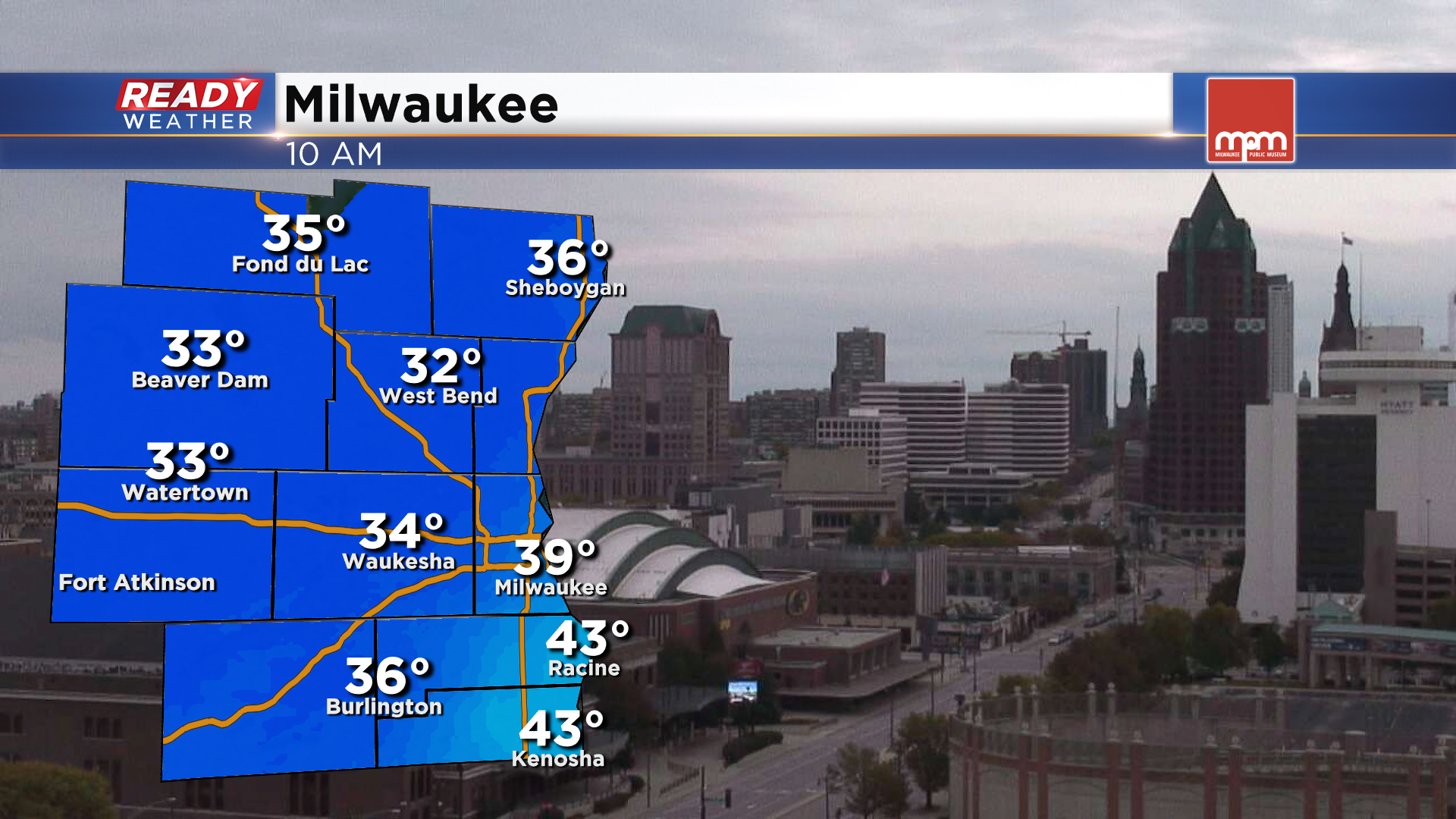 Temperatures will continue to rise into the low to mid 40s across all of southeast Wisconsin by this afternoon. While we can't rule out a stray flurry or lake effect rain shower, most of the area will be dry until later this afternoon. A band of rain will work into Dodge, Fond du Lac, Sheboygan, Washington, and Ozaukee counties between 3-5 pm. With temps in the upper 30s to low 40s, this precipitation will start out as rain, but some snow could mix in at times as we move closer to sunset, especially near Fond du Lac and Beaver Dam. 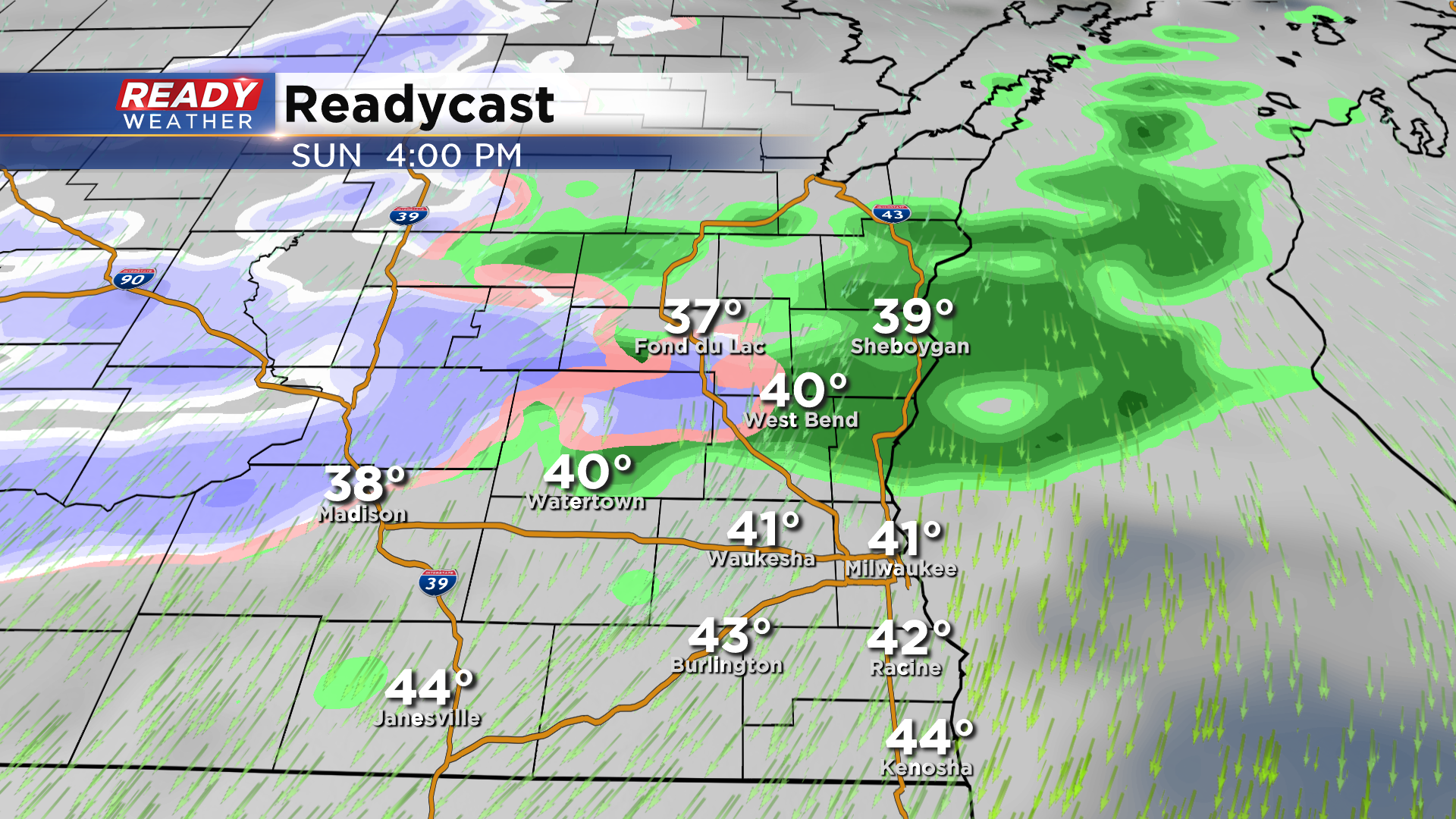 This band of rain and wet snow will start to dissipate this evening, but more patchy rain/snow showers will start to move back into the area closer to midnight. By then, temperatures will be cold enough away from the lake for primarily light snow. However temperatures near the lake will still be in the mid 30s, keeping the precipitation mainly rain with a few wet snowflakes mixing in at times. 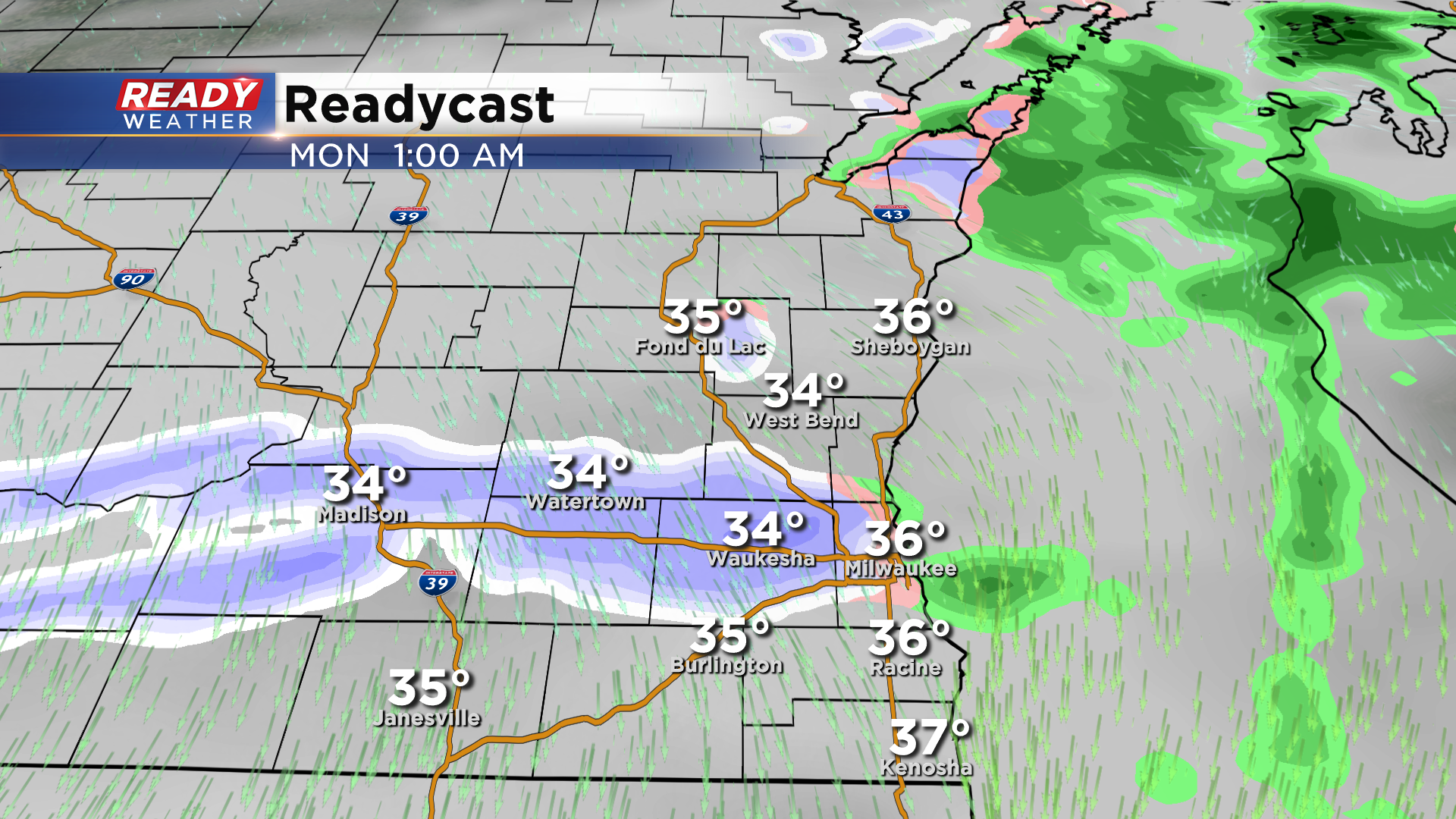 Temperatures near the lake will be between 33-35° for most of the night, but could dip to the freezing mark by sunrise Monday morning. There will still be a few snow showers around at that time, but any precipitation will end by late morning. 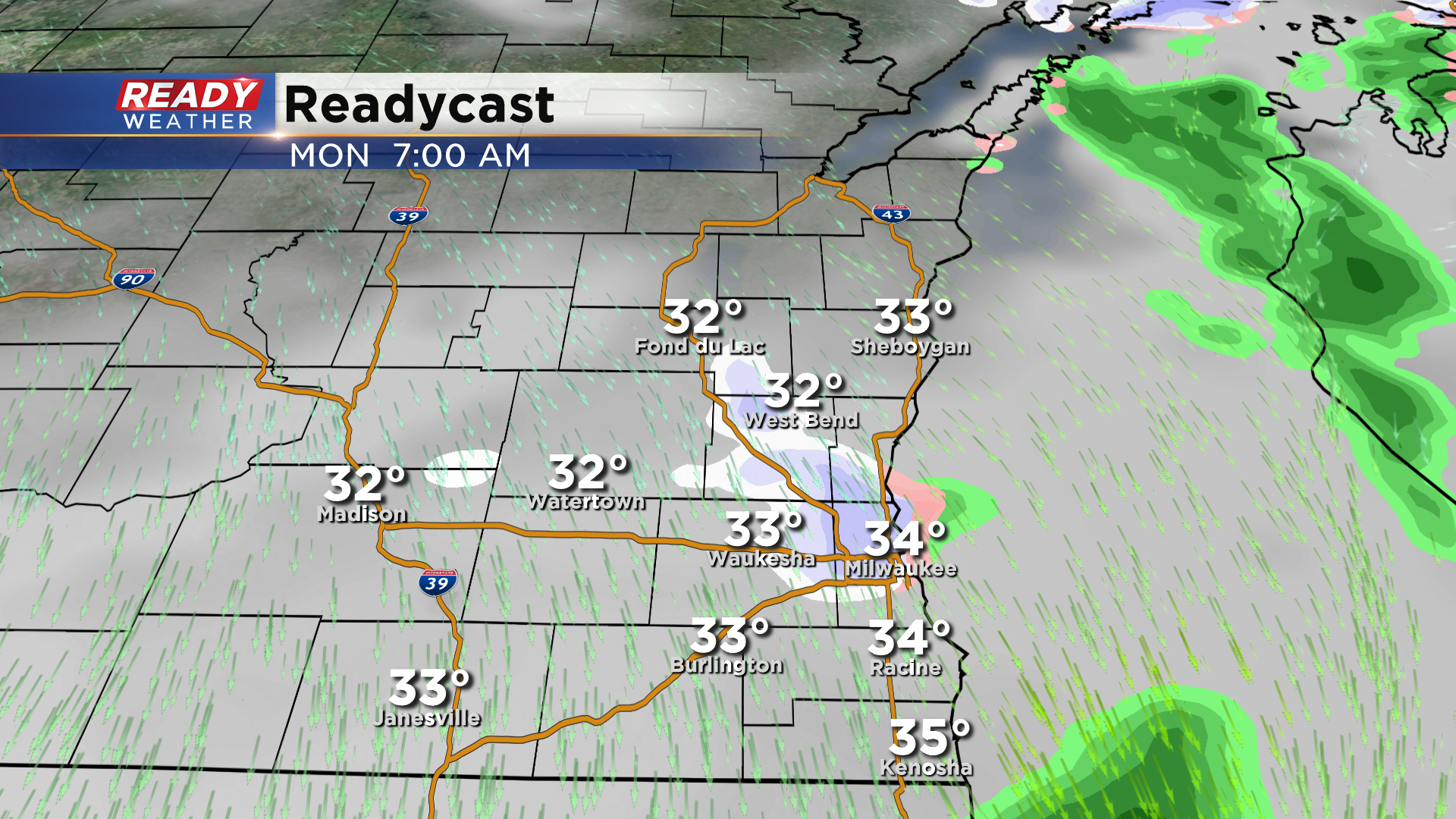 No snow accumulation is expected in Milwaukee, but places northwest of Milwaukee may see a light coating of snow on the grass or elevated cold surfaces. Accumulation isn't expected on roads, but plan for a few slippery spots especially away from the lake. 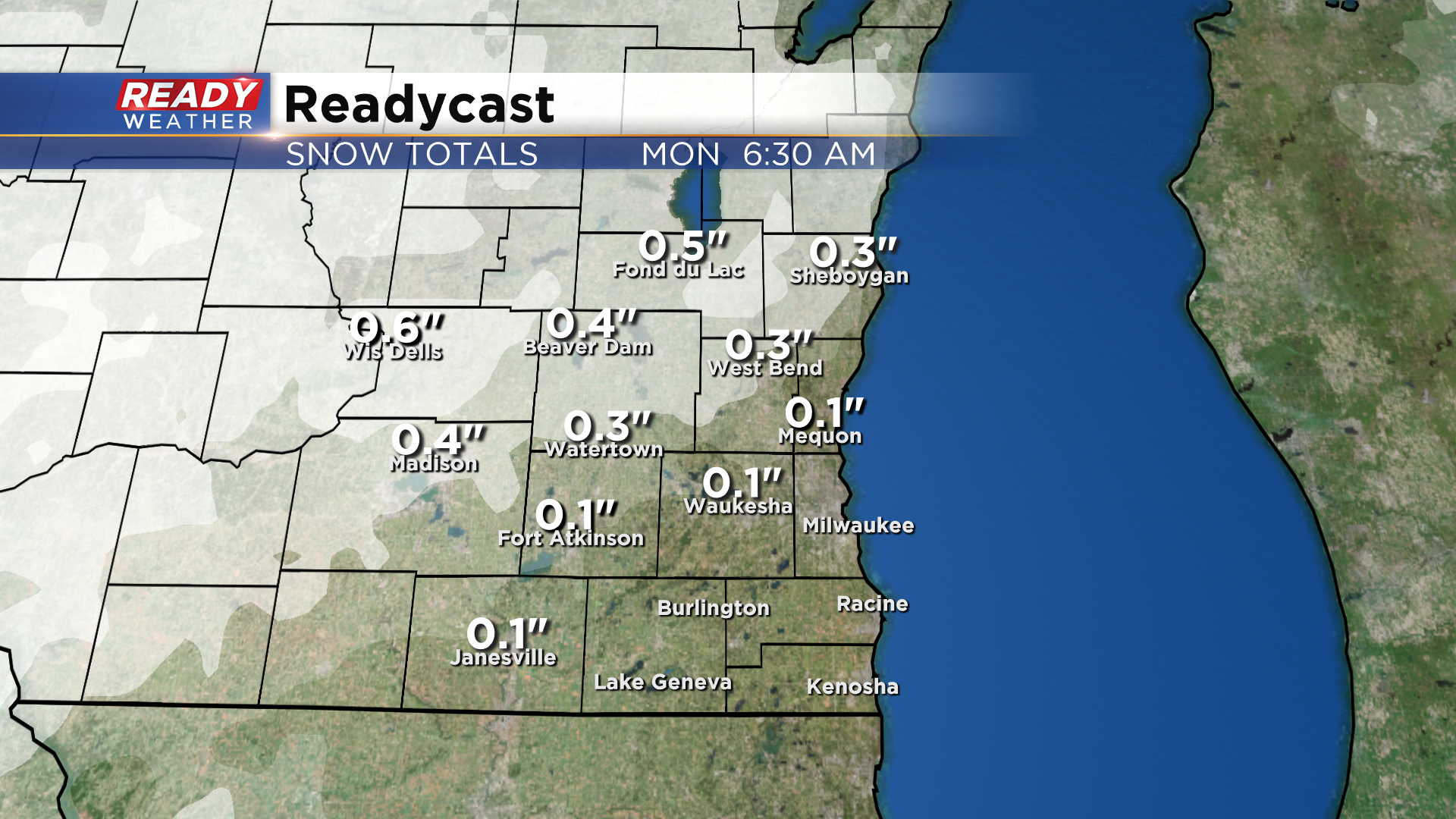 Any snow that does accumulate on the grass will melt by Monday afternoon as temperatures rise back into the upper 30s to low 40s. The good news is once this rain/snow exits the area Monday morning, we'll be dry for the rest of the week. Temperatures will remain below normal, though, with highs in the 40s to low 50s. 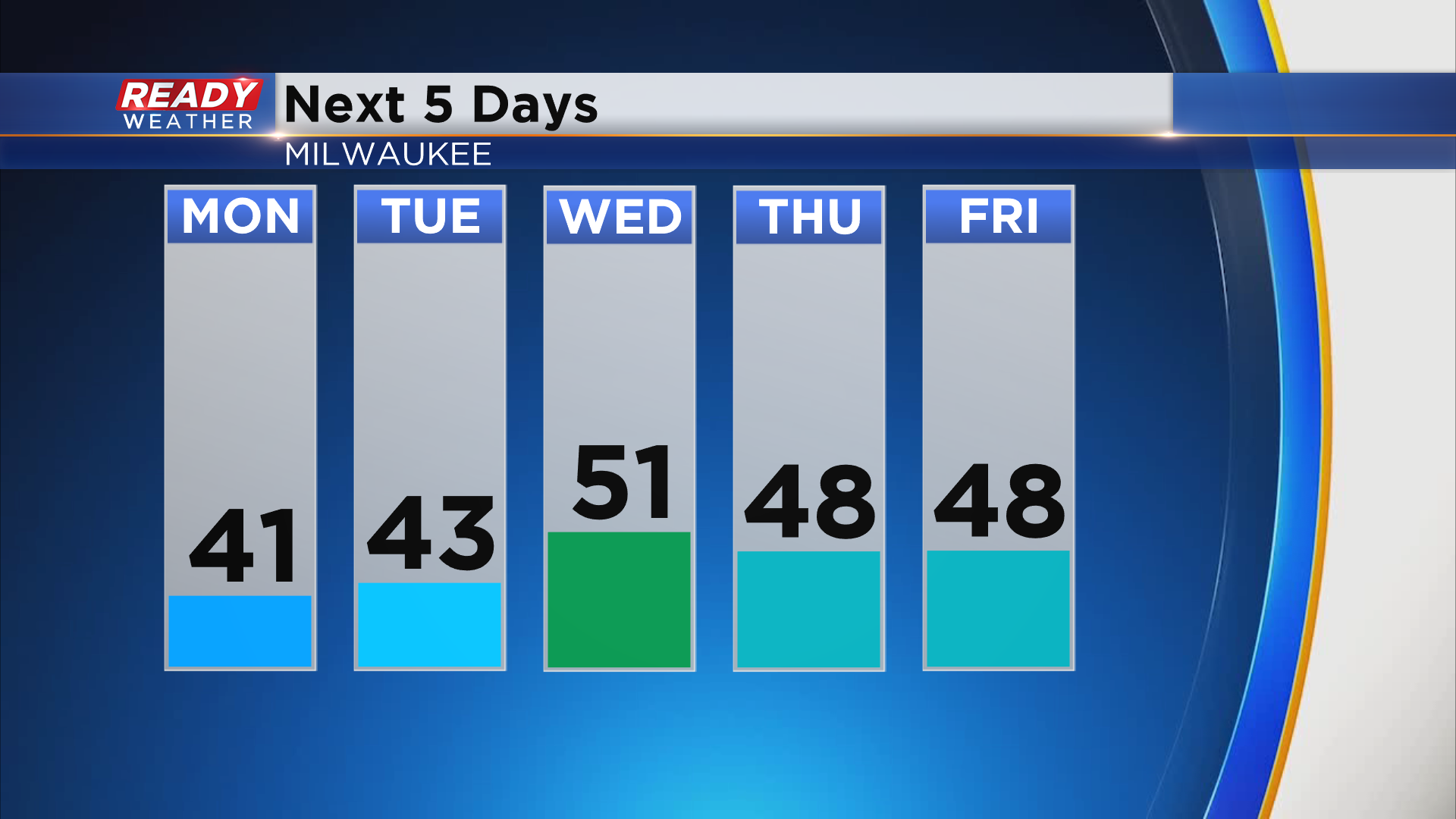 Download the CBS 58 Ready Weather App to track the light rain/snow mix and to keep up on road conditions.