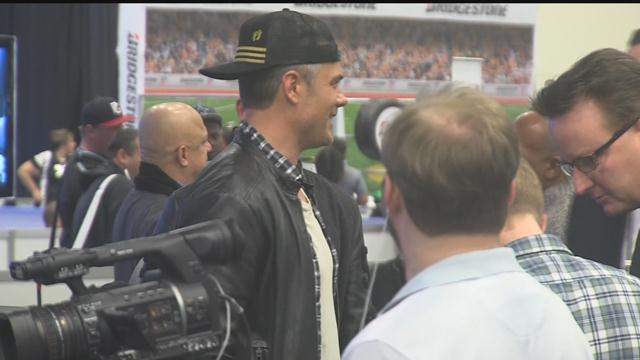 The Super Bowl events fill a week with fun, whether you're a fan, an NFL player, or someone here working for the week.

That's why when you hear the term "radio row" at the media center, it sounds like a bunch of TV and radio people filling hours of time all over the nation. And it is that, but it's also so much more. Radio row is open to fans too, a spectacle that takes up an entire floor of a convention center. Fans have to stay alert because the celebrities that hang out here too. Yes, that's Josh Duhamel, from the Transformers movie among many others. No sign of Fergie. Duhamel admits to something that might make Packers fans cringe.

"You may not want to hear this, but I am a Vikings fan. This may never make the air. I have a lot of friends who are Packers fans, coming from where we do, you're either a Vikings or a Packers fan. So I do have a rooting interest in this game, I'd like to see Manning win it. It would be a great way for him to go out. He's a classy dude. And that defense is nasty," said Duhamel.

Duhamel's next project is a movie about eccentric baseball pitcher Spaceman Bill Lee. Educate yourself on the spaceman if you don't know about him; fascinating stuff.