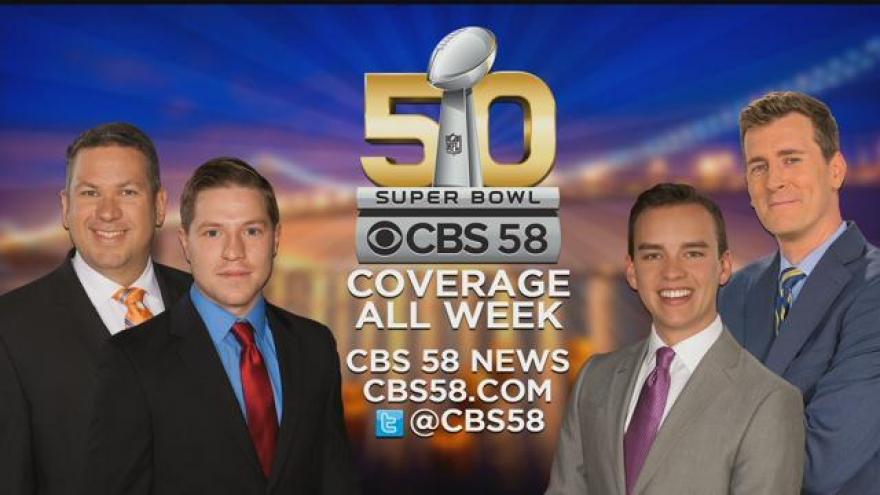 Wednesday was the CBS 58 Big Road Trip’s first full day in the Bay Area taking in the sights and sounds of the big game and boy are there a lot! The first stop of the day was the Moscone Center in San Francisco to pick up our media credentials for the week leading up to the big game. We will have to pick up different gameday credentials later this week.

From the media center it was straight to the 50th Mile where the NFL has placed kiosks with highlights and facts from Super Bowls 1-49. Although we were in a hurry, it was interesting to walk by as famous plays were being called out and to be reminded of the final scores from both memorable and unmemorable Super Bowls. The city and NFL has also placed large gold 50s around the city which many people use as an opportunity for a photo opp.

At the end of the 50th mile is Super Bowl City. We didn’t spend much time, but there are opportunities for food, drink and a few fan activities by sponsors. This is also the place where musicians perform nightly concerts. On Thursday the Band Perry will play, Friday it’s One Republic and Saturday Alicia Keys will perform a concert. The best part about Super Bowl City is seeing all of the fans dressed in their favorite teams gear! Besides Bay Area teams and Super Bowl teams the Packers were the most represented (especially Aaron Rodgers).

Then it was on to another fan favorite – the NFL Fan Experience! This was incredible; so big that every media organization has a press escort. There are plenty of very fun opportunities for fans to get their NFL on. Some highlights include autograph sessions galore (including Packers Eddie Lacy), photo opportunities at every turn, a chance to see the actual Lombardi Trophy and rings from past Super Bowls. There are also lots of activities – opportunities to try your hand at passing, running and kicking a field goal. Our own Bill Walsh tried his hand, but did about as well as the Vikings in the playoffs….

Between all of the events going on in San Francisco you could spend multiple days and not get bored!

On Thursday we will spend more time taking in different NFL activities (I hear puppies are in our future) and ending at the Madden Bowl where NFL athletes compete in the famous video game.

The CBS 58 Road Trip rolls to the big game.