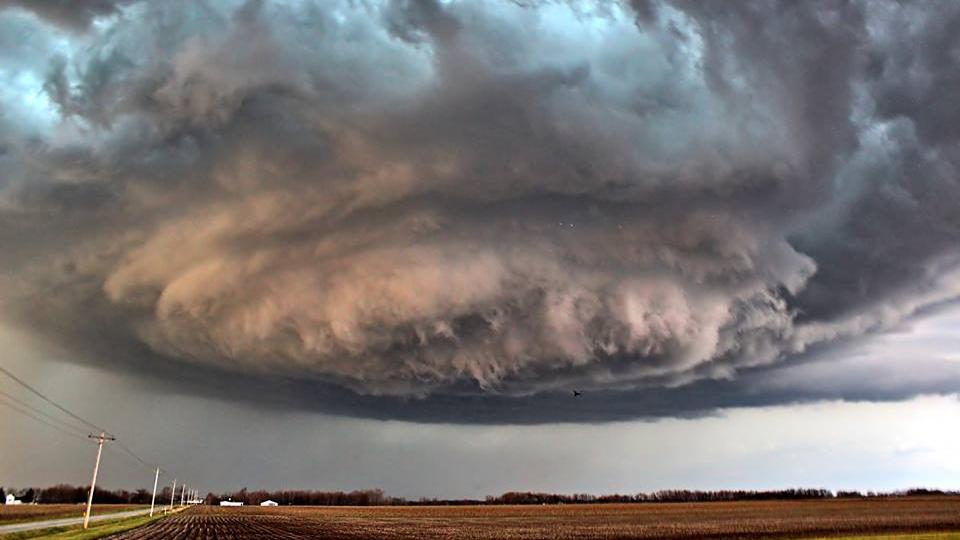 CBS 58 Storm Spotter Tom Purdy and his partner traveled to Illinois this week to chase severe storms.  Read what he saw and felt from his own words!

Waking up Tuesday morning the day was starting to look like it could be a potentially big day.  The high resolution models painted a pretty good scenario for tornadic supercells, and we agreed on our initial target of Macomb, Illinois, home of Western Illinois University.

I decided to drive up to Jason's house in Edgerton, WI around 9:30 Tuesday morning so we could set the car up and go over models, as well as wait for the 11:30 SPC update to read their thoughts on the rest of the day. When the update did come out were were happy to see our target area was now in an enhanced risk for severe thunderstorms along with a 10% tornado threat.

We left Edgerton, WI around 11:45 am en route to Macomb, IL. We arrived in Macomb, IL a little after 2:00 pm and found a Burger King parking lot to sit and wait in. Shortly after a Mesoscale Discussion was posted by the SPC, a tornado watch with very surprising probabilities was issued.

After sitting awhile, the first few blips on the radar began to form and quickly strengthen, game on!
After watching these storms from a good distance, we began to see a nice supercell take shape near Bentley, Illinois; however, it was very disorganized at the moment. We continued to watch as this storm grew closer and closer.

After continuing to watch this storm develop, more storms behind it were being tornado warned, and at one point we considered bailing on this storm and heading west.  This was a very important decision for us!

We stuck with the storm and started getting dumped on with hail that was mainly dime and quarter size.  We decided we needed to get a little south into a better position. While heading south right next to the storm, I made the remark, "it looked very outflowish and crappy."  In a matter of five minutes, while stopping to get a quick look at what was going on right outside Good Hope, IL, we realized the storm was starting to wrap up and rotate right at us. We began bailing south while the storm began to wrap up tighter, and soon after we saw the tell tale dust swirls in the field right next to us.  100 yards away a TORNADO was heading right at us!

This storm was not warned at the time.  We made a quick phone call and got safely south, only to turn around and see the tornado cross the road right behind us along with a beautifully rotating wall cloud.

We snapped some pictures and videos of the storm, and proceeded to follow the storm for several miles watching it kick up dust/dirt and a little debris intermittently. We lost the storm around St Augustine, IL after being stuck behind emergency crews and getting hit hard with Rear Flank Downdraft.
After we got out of that mess we continued towards Peoria, IL where another storm was just going tornado warned.  We battled wind blown hail and may have briefly caught a glimpse in the lightning flashes.

After losing sight of this feature we had lightning bolt after lightning bolt hitting all around us, so we decided to stop and attempt some lightning pictures before making the 3 hour trek back north towards home.

This was the perfect end to a great day as we make the drive back to Wisconsin. We arrived in Edgerton, WI around midnight exhausted but excited for what had just happened that day.

The Good Hope, IL tornado was officially rated an EF-2 with a max width of 1800 yards (over 1 mile wide).  Above is a timelapse video of the meso/wall cloud.