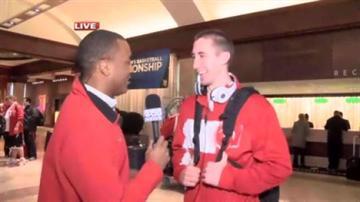 MILWAUKEE-CBS 58's Earl Arms was there as the UW Badgers arrived in Milwaukee for the NCAA tournament.

Usually the crowds are neutral, but with the game so close to Madison Gasser's thinking maybe the scales will be tipped in their direction when it comes to the fans in the stands.

\"Hopefully we'll have a big crowd and we're happy about that.\"

Still, Gasser says he and his teammates aren't taking anything for granted.

\"We're really excited but that American offense, they're tough to guard. It's going to take a lot of focus and preparation.\"

Doors at the BMO Harris Bradley center open for practice Wednesday at 11 a.m.

The Wisconsin Badgers are scheduled to take the court at 1:30 p.m.

Badger fans heading to Milwaukee for the second and third rounds of the 2014 NCAA Tournament are encouraged to join fellow Badgers for an NCAA Basketball Pep Rally.

The fun begins on Wednesday at 6 p.m. in the rotunda of the Milwaukee Theater in downtown Milwaukee.

CBS 58's Earl Arms is with UW Milwaukee in Buffalo. Look for updates on the CBS 58 News at 5 and 10 p.m.
Share this article: