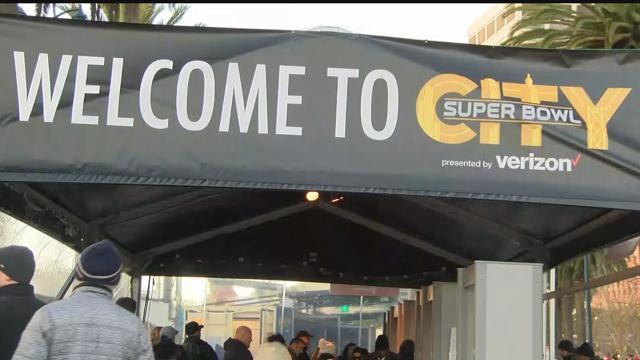 A week from Sunday, the center of the football universe will be Santa Clara, California at Levi's Stadium. Sunday and for the next week, the center is in downtown San Francisco and Super Bowl city. The fans are already coming in, enjoying the atmosphere and getting prepared for the biggest sporting event and spectacle in the world.

In a city thousands of miles away from Wisconsin, even the trolley cars are painted green and gold, and yes we ran into Packers fans as well.

"I'm from Illinois. But I'm an educated woman, so I'm a Packers fan. That's at least what I tell everybody anyway," said Sarah Foote.

"My mom's family is from Milwaukee Wisconsin. I've got cousins, aunts, and uncle," said Larry Thielke.

David Ade and Kevin Holden arrived in San Francisco, and you know who else has arrived in the Bay Area? The two teams involved in Super Bowl 50.