Caught On Tape: Teen with Autism Gets Special Prom Invite 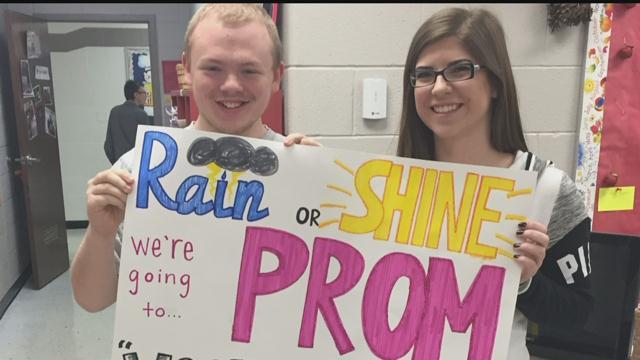 CBS 58—Prom season is just around the corner and for a couple of Union Grove High School students, it’s about more than fancy dresses and tuxedos.

Senior Kenna Glassen decided to ask her friend, Jordan Born, a junior with Autism. The “promposal” was captured on a video, and is now making the rounds on Facebook.

“I just formed a special bond with Jordan,” Kenna said.

And Kenna says she wanted to ask in a way that was uniquely Jordan.

“I was trying to think of a clever way to do it that would like, have puns with it that appeals to him and he adores the weather,” Kenna said.

So she made a sign that read, “Rain or Shine, we’re going to prom, ‘weather’ you like it or not.”

And while prom may seem like a typical teenage right of passage, for Jordan and his family, it's more than that.

“It's not something that he would seek out to do on his own,” said Jordan’s stepmother, Sandy Born, who adds that the teen is pretty shy.

When Jordan’s mom, Tina Michalek saw the video of the “promposal”, she says it brought tears to her eyes.

“It’s just my Jordan and he's special and I never thought that he would get to do this,” Michalek said.

Kenna’s mom, Gaya Glassen, says she notices Kenna lights up when she talks about Jordan.

“I wish that it wasn't such an unusual thing,” Glassen said.

As for the big day, Jordan will be wearing his favorite color- pink, and he says he’s looking forward to dancing the night away with his best friend.