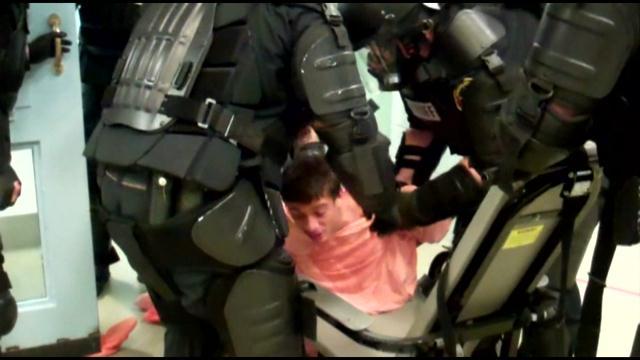 MILWAUKEE-- Disturbing video released of a Kenosha County inmate getting paralyzed during a cell extraction at the jail.

Sean Bialas, 21, went to jail for bail jumping, disorderly conduct, and taking a car without consent.

\"Just understand that there's a possibility you could get hurt,\" said an officer to Sean Bialas.

Shortly afterward, a team stormed through his cell.  The incident happened on November 7, 2014.

The video does not show how officers took Bialas down.

\"You guys just paralyzed me,\" said Bialas, as corrections workers pulled him out of the cell.

Bialas says this repeatedly as deputies dragged him out.

The team of deputies tell him to relax as they restrained him in the chair.

Bialas continues to tell officers that he can't feel his limbs-- and when he's pushed over.

His attorney, Jon Safran, says the video is deeply concerning.

The case was referred to Racine County, where investigators concluded there's no basis to believe excessive force was used.  A case that forced a 21-year old man to live his life as a quadriplegic.

\"This is obviously a devastating injury for anyone, let alone someone at his young age,\" said Safran.