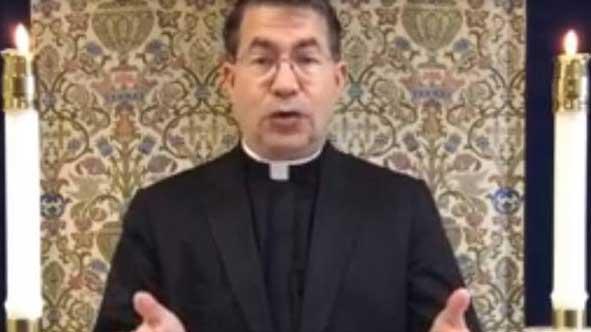 (CBS NEWS) A staunch anti-abortion Catholic priest in Texas says he was given an aborted fetus for proper burial, but he thought it was best to display the fetus on an altar first in order to make a political point about the 2016 election.

In a Facebook Live post from Nov. 6, Father Frank Pavone said: “I am showing him to you because in this election we have to decide if we will allow this child killing to continue in America or not. Hillary Clinton and the Democratic platform says yes, let the child killing continue (and you pay for it); Donald Trump and the Republican platform says no, the child should be protected.”

(You can view the post and video here, but be warned some viewers may find the content offensive.)

Pavone is a priest in the Amarillo, Texas, Archdiocese, and is a well-known and long-time vocal opponent of abortion. His aggressive work on the topic has run him afoul of the diocese previously, reports CBS Amarillo affiliate KFDA.

In 2014, Cardinal Timothy Dolan cut ties with the Pavone, despite Dolan’s own outspoken advocacy against abortion, reports the Washington Post.

In a post on the New York Archdiocese website, Dolan’s former home diocese, Ed Mechmann writes that Pavone is free to post such videos as an American citizen, but that it was wrong to do so.

“It was absolutely appalling, and deserves to be repudiated by all of us who consider ourselves to be pro-life in the fullest meaning of that word,” Mechmann wrote.

Mechmann said Pavone was just exploiting the body of the dead baby to further his own ends, and not worshiping or loving it as a good Catholic should. He expressed special horror for placing the baby’s body “on an altar, which has been sanctified for the celebration of the Holy Sacrifice of the Mass.”

In response to the outrage online against the video, Pavone has replied to several angry Facebook users who saw his post.

In defense against claims he was exploiting a dead baby, Pavone said: “The exploitation was the violent killing of the child, and deprivation, by the government, of the protection of that child’s life. THAT’s the exploitation. This body would have been in the garbage had we not given this child a funeral and a cemetery crypt. Wake up.”

The Washington Post reports that a recent poll show Catholics divided in this election, with 48 percent of Catholics going for Hillary Clinton while 44 percent favored Trump.