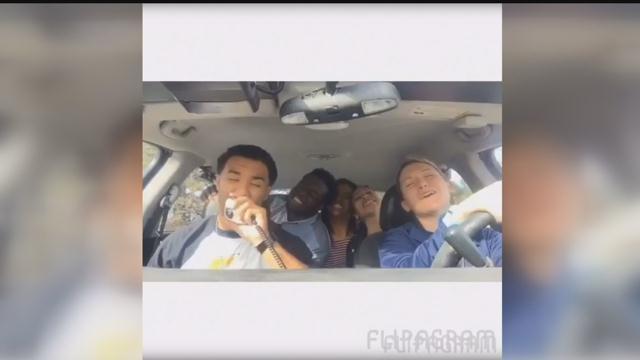 It starts with Adele.

"We're trying to get you, hello," said junior Kiara Riser.

Next, a song that's a blast from the past.

"Making my way downtown," they sang.

Music. It's the universal language a group of students is using to chance perceptions of police.

"We see past the badges," said junior Anais Hernandez.

"I wanted people to see what I saw," Riser said. "Before, I was that person who didn't care about the police."

The karaoke-style video is a reflection of a special relationship that started inside Racine's Case High School. Justine Justman has been the resource officer for five years.

"She was one of my role models I looked up too," said Dangelo Green, senior. "I'm grateful that I met her because if I didn't, I still wouldn't know what I want to do in like five years."

A member of the school's criminal justice club came up with the fun idea to show all police officers are not bad.

"They influence all the other kids," said Officer Justman, with the Mt. Pleasant Police Department. "We have tons more kids who feel comfortable with us, come talk to us and include us in stuff."

But some of the students admit, it's not easy. Walking the halls, they say they get called names for hanging out with officers.

"I don't think we let it get to us as much as we should," said Hernandez. "But like honestly, out of that uniform, they're just like us. They're human beings."

They're human beings who want the community to know this.

"Those officers wearing these badges are relateable," said Mt. Pleasant Police Officer Eric Oertel. "They can be approached and they're only here to help them."

Help them, and sometimes, entertain.

"Give everyone a chance, you never know where it could take you," Hernandez said.

Case High School also has the STOP Program, which stand for students talking it over with police. Started by Milwaukee police, the seven-week curriculum gives students a closer look at what officers do and why.