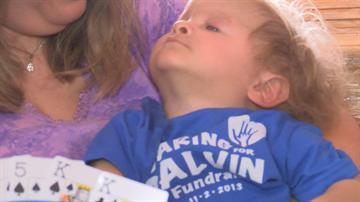 PEWAUKEE -- Dan Brezgel calls the hours and days after his son's birth a \"surreal dream.\"

That dream became Dan's reality.  Doctors said his 16-month-old son Calvin was healthy before birth, but  that all changed the day he was born.

\"He was born without eyes, he's 100 percent deaf, he has to be fed through a feeding tube because he aspirates so  it goes into his lungs, he has seizures,\" Brezgel said.

Calvin suffers from an extremely rare genetic defect.  So rare he's one of only 40 in the world who have it.

\"It's tough to get through, but at the same time, we have a good sense of humor that we do a good job of that,\" Brezgel said.  \"But  we still have a long road to go.\"

That road often involves hospital visits that can last anywhere from a week to a month.  Dan's friend Ryan Gardner saw an opportunity to help the Brezgel's with their massive medical bills.

\"Anybody that has a child, or children that's aware of Calvin's condition would want to help,\" Gardner said.

Ryan organized a Caring for Calvin fundraiser Saturday at his bar, Curly's Waterfront in Pewaukee.  They hope to raise more  than $5,000 through raffles, food and drink proceeds.

\"It's just a really nice area,\" Gardner said.  \"We know there are a lot of regulars that come in here that know we're trying to do  a great thing today and just want to help out.\"

\"He went above and beyond what most people would do,\" Calvin's grandpa Al said.

Al is one of those regulars at Curly's.  He says every day is a struggle, but remains confident  there will be help for his grandson in the future.

Calvin's parents know their son will always face challenges, but those are struggles they're ready to face as a family with the help of the community.