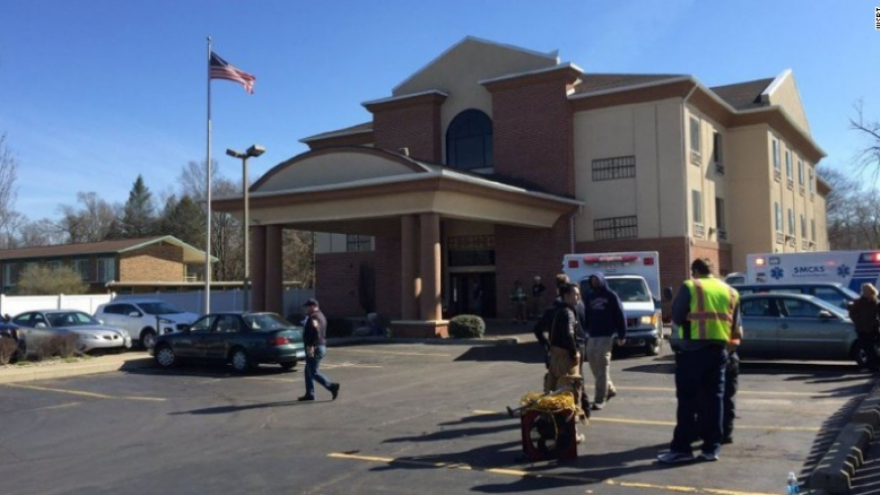 (CNN)- One person was found dead and 8 others were hospitalized after a group of people were found unconscious around a hotel's indoor pool in southern Michigan. Fire officials said they believe the cause was carbon monoxide poisoning.  Eight people were treated at local hospitals, including first responders who helped unconscious victims, according to police in Niles, Michigan, a town of about 11,000 just north of the state's border with Indiana. Jessica Hines, a spokeswoman for Lakeland Hospital in Niles, told CNN that one other person was \"confirmed dead on arrival.\"

The Niles Police Department identified the deceased as 13-year-old Bryan Douglas Watts of Niles. Six other children were taken to Memorial South Bend Hospital in Indiana, police said. They include five children found unconscious alongside Watts at the Quality Inn & Suites hotel pool. Their ages range from 12 to 14 years old, Niles police said. Another child, who police said had just left the pool area, was found unresponsive in a first-floor room. Two others treated for carbon monoxide-related exposure included a Niles police officer and Berrien County deputy. Police responded to the hotel around 10 a.m. ET, according to CNN affiliate WNDU-TV.

Police said that, when they arrived, carbon monoxide levels at the hotel were 800 parts per million, according to CNN affiliate WBND-TV. US standards for carbon monoxide are 35 parts per million for a one-hour exposure. Niles Fire Department Captain Don Wise attributed the incident to a faulty pool heater. \"The ventilation system on the heater had issues, the exhaust was not functioning properly,\" said Wise. \"Our mechanical inspector verified that. The hotel is shut down now until repairs are made.\"

Carbon monoxide is an odorless, colorless and tasteless gas that is produced when a fuel is burned. When too much carbon monoxide is in the air, it can replace the oxygen in red blood cells and can lead to tissue damage or death. Choice Hotels, which owns the Quality brand, released a statement about the incident, saying it is \"working closely with local officials to manage the situation. ... Our highest priority is always the safety and well-being of our guests.\"

CNN's Jessica Rajendra and Evan Simko-Bendarski contributed to this report.