Car stolen with child in back seat 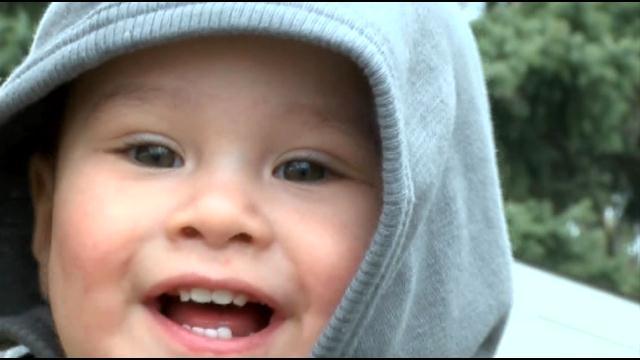 The smiles of little Elijah give no hint to the drama and worry his family experienced Thursday morning.

The baby was in the back seat of a car when his mother stopped for a quick soda at a gas station at 60th and Oklahoma.

In an instant the car and the baby were gone.

The mother's anguish was short lived.

The child found in the abandoned car a short time later in a nearby neighborhood.

The child was not alone in the car very long and appeared to be unharmed or traumatized when CBS 58 caught up with the family.

\"It was quick 30,40 seconds,\" the mother Amber Strube told CBS 58's Lila Carrera. \"I just want to give a message to all parents, mother and fathers, don't leave your car unattended with the keys in there and the children inside. It's not too cold or too hot where my son would have been harmed that way. It's close to home. A good neighborhood. Anything can happen anywhere. Milwaukee County Police wanted to arrest me. I could go to jail. I go to court Wednesday at 1:30. Hopefully the D.A. will be nice and let it go. I'm a caring loving person. I have a step son and a daughter as well. I've never had charges pressed against me. I would never hurt anybody.\"

At last report, a suspect had not been apprehended. Witnesses described her as an African American woman with blue hair. Police said the suspect arrived at the gas station in a stolen vehicle before she took off with Strube's car.

The car was taken near 60th and Oklahoma and dumped near 50th.