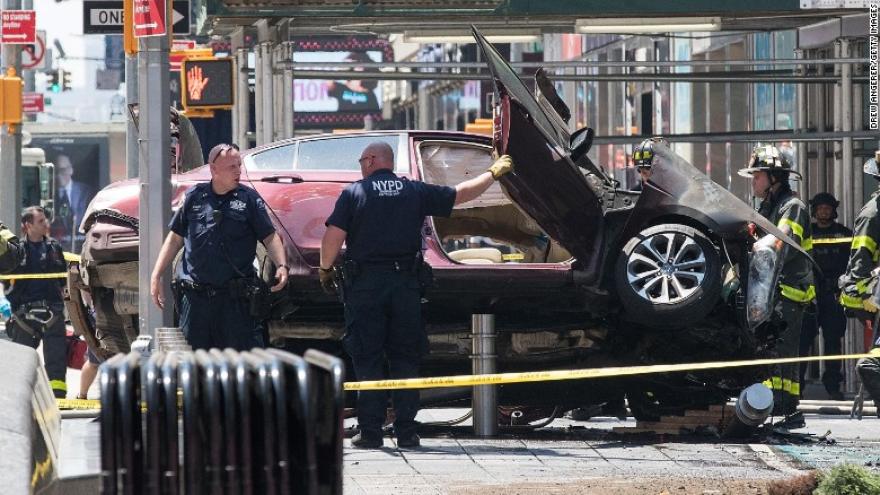 NEW YORK (CBSNewYork) — One person was killed and 22 people injured after being struck by a car in Times Square shortly before noon Thursday.

An 18-year-old woman was killed and 22 people were injured  – including the victim’s 13-year-old sister – after being struck by a red Honda Accord before it came to a stop by crashing into steel barriers at 45th and 7th Avenue, Mayor Bill de Blasio said.

Four of victims are in critical condition. Six others were rushed to Mount Sinai West Hospital, with two in serious condition and four others expected to be treated and released.

Police escort 26-year-old Richard Rojas, the man suspected of driving through Times Square killing one person and injuring 22 others on May 18, 2017. (credit: CBS2)

The suspect has been identified as 26-year-old Richard Rojas of the Bronx. Rojas has previously been arrested twice for DWI.

“This is not an act of terror,” de Blasio said. Nonetheless, the NYPD was increasing its security posture at a number of major sites across the city “out of an abundance of caution,” he added.

Rojas is a US citizen and a former member of the US Navy, de Blasio said.

The incident began at 11:54 a.m. as Rojas was driving southbound on Seventh Avenue through Times Square, police said.

Once his car slammed into the stanchion, Rojas got out of the car and was tackled by passersby and officers and taken into custody.

“They get him in the patrol car, they get him back to Midtown South Precinct, he makes certain statements which I’m not going to get into right now,” Aubry added, saying Rojas was being tested for drugs and alcohol.

Rojas was arrested in 2008 and 2015 for drinking and driving. He was most recently earlier this month for menacing, Aubry said.

“The driver tried to run from the scene, and the bouncer from Planet Hollywood hit him, so we jumped on top of him and ripped his shirt, wanted to make sure he had no gun or knife on him,” a tour bus ticket agent told CBS2’s Janelle Burrell. “I see the car coming in fast, no brake, no nothing. Bang! Before I realized it there’s fire on the car… my co-worker jumped from the scene.”

“Everyone was just kind of hanging out and the car just came and hit the pole out of nowhere,” a witness told Gainer. “People were going to the scene to check it out. There was actually a guy trapped in the car. Within 45 seconds [first responders] were on the scene. People were concerned it was gonna be a bomb.”

“We all feel deeply right now for those who were injured and for the families and particularly for the family of the young woman who was lost, our prayers are with her family and with all those right now who are suffering because of this horrible incident,” de Blasio said.

“Today’s events at Times Square were nothing short of horrific,” said Gov. Andrew Cuomo. “As facts continue to emerge, my heart goes out to the victims of this terrible tragedy, as well as their families.”

“This is a tough day for New York City, but as usual, the people of New York City will stand firm, will be resilient,” de Blasio said. 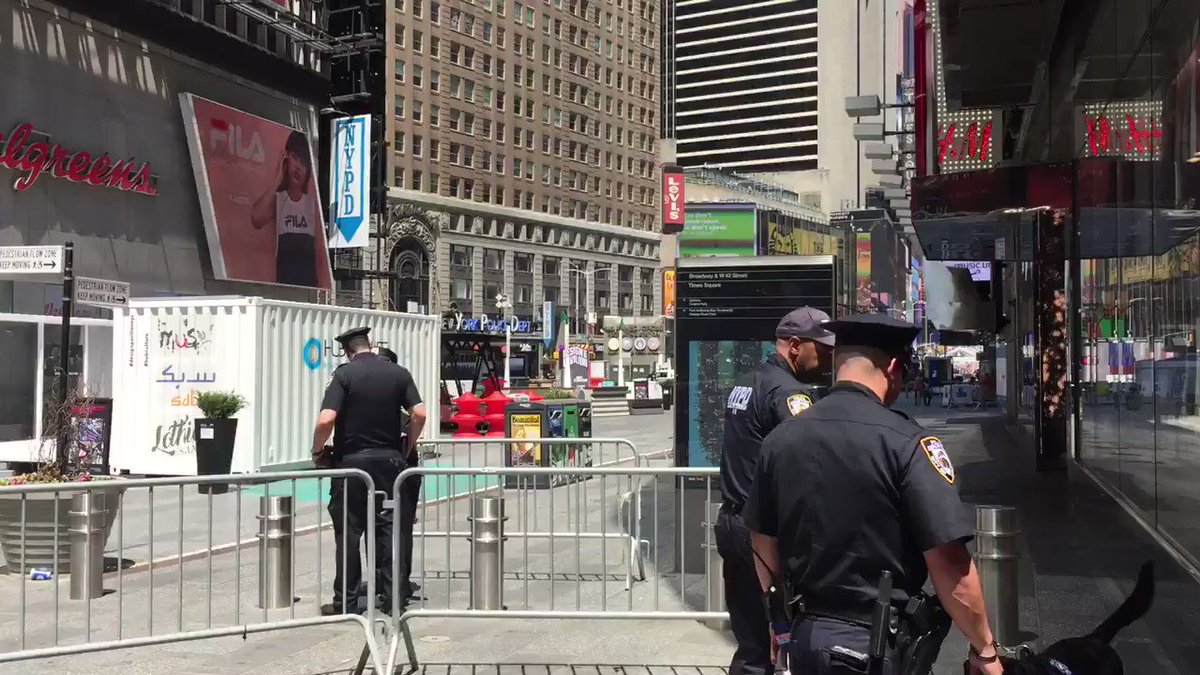 Traffic in the area was rerouted and much of the area was blocked off. Click here to check current traffic conditions.

“I’m scared, it’s very surprising but scary at the same time. Just how one person may end up doing this, out of the blue,” said another witness. He also said he heard a “huge bang” when the crash happened.

“The car just came really fast and injured a lot of people. We actually saw the people in the ground and tried to help but we couldn’t do anything.”

“It made like a path and that’s it,” another witness told Gainer. “They caught the person after a couple of seconds. It’s really tragic. .. Some woman in front of us she died and lot of people had serious injuries. Blood everywhere, we kept looking at ourselves like what can we do. But the police came really fast. I just feel like everybody had no reaction because we tried to help . it’s just like people on the ground hit by a car, there’s not much we could do and everybody was like really stunned and we didn’t know what to do. It was really a terrible scene.”

“There was a lot of tourists here buying tickets for Phantom of the Opera because there’s a 2 p.m. show,” a witness told CBS2’s Janelle Burrell. “Also a lot of people sitting and having lunch and talking, it was a nice day. What happened was a surprise, I just heard the sound of the car on fire … It happened so fast, it was a lot of smoke and fire, you couldn’t see nothing. … It was a very big surprise, I was scared because I remember Paris and I was scared to get closer.”

The car involved could be seen on its side, with two wheels elevated as it rested on the stanchion.