WAUKESHA, Wis. (CBS 58) -- The Waukesha Police Department was dispatched to an apartment complex for a report of a vehicle into a swimming pool.

Upon arrival, officers located a 2017 Buick Verano submerged in 5.5 feet of water. 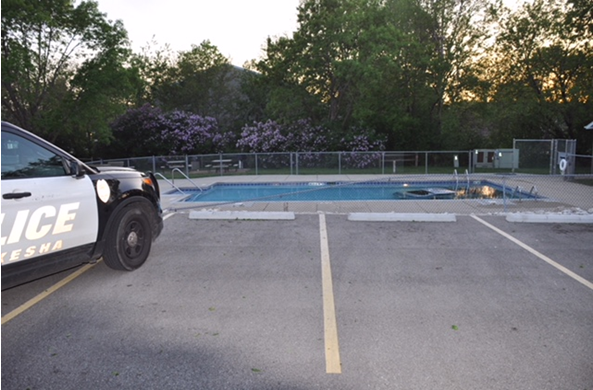 Police say that the driver and his fiance pulled into their parking stall near the pool. The driver then decided to pull further towards the concrete curb and accidentally hit the accelerator, driving down an embankment, through a chain link fence, and into the pool.

“That was a crazy scene,” said Shruti Singhal.

She was sitting in her living room when she heard people shouting outside.

“I just came out running and realized, these are my people, I know these people,” said Singhal.

She said the couple was stunned but not hurt. “Somehow, I don’t know what happened, he pressed the accelerator instead of the brake pedal and the car just went into the water,” said Singhal.

They told Singhal it happened in matter of seconds.

Luckily both were able to get out of the car through the doors. “They both were safe so it became a crazy scene,” laughed Singhal.

Because both were safe, and after the initial shock wore off, they were able to laugh about it.

For now the pool is covered and the fence is replaced. All that’s left is scrape marks on the ground and a wild story.

“It’s like a movie scene or something, my friend said they have seen such scenes in movies,” said Singhal.

It took a crane to get the car out.

The pool was scheduled to open May 24th, but the landlord sent out an email to residents saying it will stay closed for the time being.