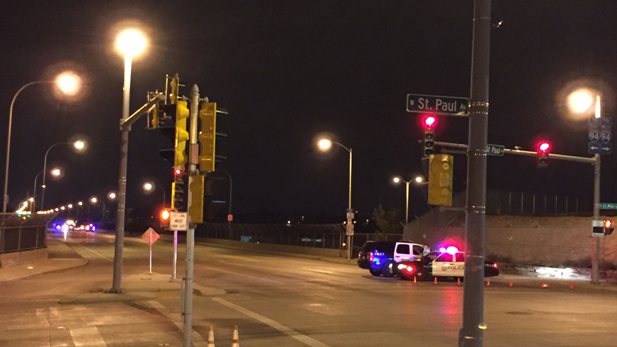 Only minor injuries were reported in a three vehicle collision early this morning on the 27th Street viaduct.  According to the Milwaukee Police Department, the three vehicles, including a Bell Ambulance, collided around 1 AM on the bridge near St. Paul Avenue.   According to the Police report, an older model Pontiac Grand Am was traveling northbound at a high rate of speed when it swerved into the northbound lane, clipping the Bell Ambulance.  The ambulance went out of control and swerved into the path of a southbound Chrysler 300.  The two female Bell Ambulance employees suffered minor injuries as a result of the accident.  A female patient they were transporting was not injured in the accident.   The two adult males in the  Chrysler were not injured.   The adult female driver of the Pontiac Grand Am suffered a non-life threatening injury.  Her two adult female passengers were not injured.  Beside driving at a high rate of speed, the Police say the driver of the Grand Am does not hold a valid driver’s license.  The MPD is continuing to investigate the accident.