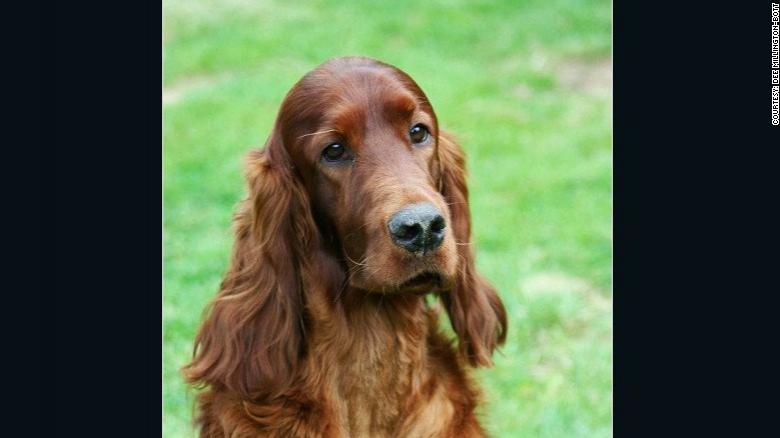 (CNN)An investigation is underway after a canine competitor died the day after taking part in Crufts, one of the world's most prestigious dog shows. An autopsy indicates he was poisoned.

Three-year-old Irish setter Thendara Satisfaction -- known to his owners as Jagger -- took second prize in his class at the event in Birmingham, central England, on Thursday.

But just a day later, after returning home to Belgium, he became ill. Owner-breeder Dee Millington-Bott told CNN Jagger was \"finding it hard to breathe\" so a veterinarian was called, but the dog died before he could get there.

\"The vet thought it was suspicious, so carried out an autopsy,\" she said. \"They found cubes of beef in his stomach that had at least two types of poison inside. Pieces of beef had been stitched together so that the poison didn't come out.

\"He had enough in his system to kill a horse, according to the vet,\" said Millington-Bott, who is at a loss to explain why Jagger was targeted: \"We can't fathom why anyone would do this.\"

\"I've been doing this for 30-odd years and I think I would have to give up on everything if I believed that someone who shows and breeds dogs would kill a dog. We all do this because we love dogs. If you hate me for being successful, then stick a brick through my window or something. But why would you involve a dog?\"

Toxicology tests are being carried out. The vet has reported the dog's death to Belgian police, and Millington-Bott said she would likely contact West Midlands Police in the UK too.

A spokesperson for the Kennel Club, organizers of the Crufts dog show, said there had never been such an incident in the history of the competition, which dates back to 1891.

\"We are deeply shocked and saddened to hear this terrible news and our heartfelt sympathies go out to Jagger's owners,\" said Caroline Kisko, secretary of the Kennel Club, in a statement.

\"We understand that a toxicology report is due next week and that this matter has been reported to the police - we will work with them and help however we can.\"

Television personality and writer Clare Balding, who hosts TV coverage of Crufts in the UK, took to Twitter to express her shock at the news: \"Everyone at #Crufts2015 horrified at death of Irish Setter Jagger & post-mortem found poison. Awful for all concerned,\" she tweeted.