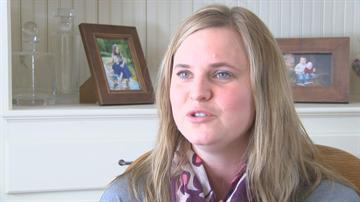 \"We were just about to the door when we heard the original saleswoman shout  after us, 'Good luck, I hope all of your hair falls out,'\" Ziebell said.

The 32-year-old mother of two was diagnosed with a brain tumor in December.  She and her sister had been out shopping for wigs when things turned bad.

\"[I] said a few words that I probably shouldn't have said, but it was just, I couldn't even believe that somebody would say that,\" Ziebell said.

Ziebell left shaken and turned to her blog, which she started after her  diagnosis.  Within a day, she says her post had more than 600,000 views.

\"The response that I had to this was just crazy,\" Ziebell said.  \"I had no intentions of doing  this.\"

\"We always treat everybody with a lot of kindness, we do,\" owner Sharon Heyden said.  \"That's what we're known for.\"

Heyden tells a different story. She says things got bad when Alison and her sister tried to look through a wig catalog on their own, something  they don't allow.

Sharon says she tried to calm everyone down, but couldn't and wished the sisters  well.

\"'Sorry for your hair loss, have a nice day,'\" Sharon recalls saying.  \"And then she came back storming in here and that's when she said, 'F-you' some more.\"

Reinke heard about Alison's story through friends and social media.   Now she's donating a $1200 human-hair wig along with other gifts from clients and businesses.

\"I think it's so easy to focus on the bad of the story, but to see so many  people focus on making it good is the true message in all of that,\" Reinke said.

\"I don't have time for negative and stuff like that, I just want to kind of  inspire people to look for the better,\" Ziebell said.

Heyden tells CBS-58 she would gladly welcome Alison back to her store after all of this, even saying she'd offer her a free wig.  Alison says she appreciates the offer but has no intention of coming back.  Ziebell posted on her blog Saturday she's glad for the support and hopes everyone moves forward.