Campaign Underway to Elect Barack Obama as President in France 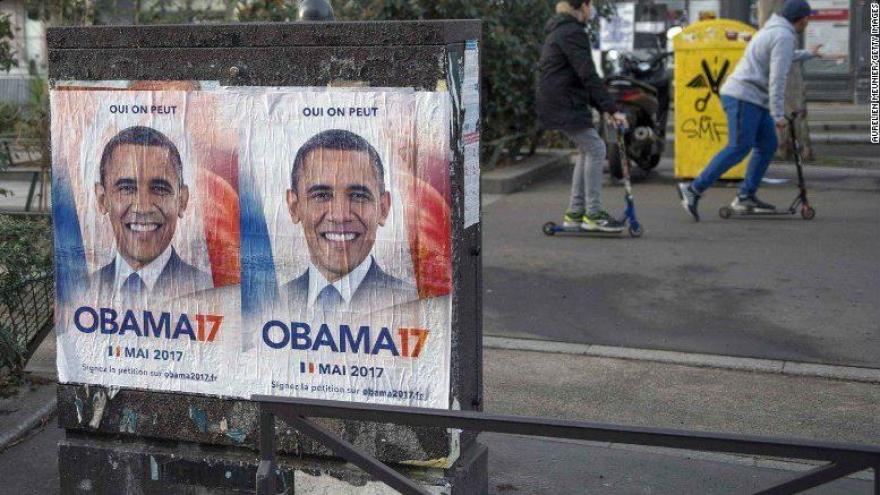 (CNN) Could France elect Barack Obama president? Not really -- but that's not stopping the organizers of Obama17, a guerrilla campaign trying to entice the former U.S. president to head to Paris.

"It's totally crazy, but the cool thing is that once you get past that, you start thinking that maybe it's possible. Who cares that he's not French? He's Barack Obama," one of the campaign organizers told CNN.

They've launched a website and they put up 500 posters of Obama around Paris last weekend, said the organizer. He asked to be identified only as Antoine.

They're hoping to get 1 million people to sign a petition urging Obama to run.

Yes, it's a joke, he admits -- but one with a serious purpose.

"We want to show that people are fed up with the politicians here. People are tired about it and they like this joke. It gives people a little fun amid all these scandals," he said.

French voters go to the polls April 23 in the first round of voting for a new president. If no one gets more than 50% of the vote, the top two finishers go to a runoff on May 7.

Someone to vote for, not against

Polls suggest that Marine Le Pen, the leader of the far-right National Front party, will top the field in the first round, but won't get the absolute majority a candidate needs to win outright.

Antoine isn't a fan of the frontrunner.

"We are so fed up with what Marine Le Pen is doing, and with the fact that we weren't able to find a candidate to vote for, only one to vote against," said Antoine. "We started talking about that and it came up that Obama is free -- so why not hire him?"

Antoine knows there's not much chance Obama will play along with his joke.

But he says people have been getting in touch with serious suggestions -- for example, how to get around the problem that Obama isn't French.

"We've had some funny emails from lawyers telling us how it could be possible. He would have to be naturalized by the president of the French Assembly," Antoine said.

It's not clear whether Obama is aware of the project, but Antoine is hopeful.

"I think if Barack Obama answers this, there will be a huge amount of reaction. I think he might like this kind of thing," said Antoine. "People in France would get crazy, especially young people. But he won't say yes to our proposal."a