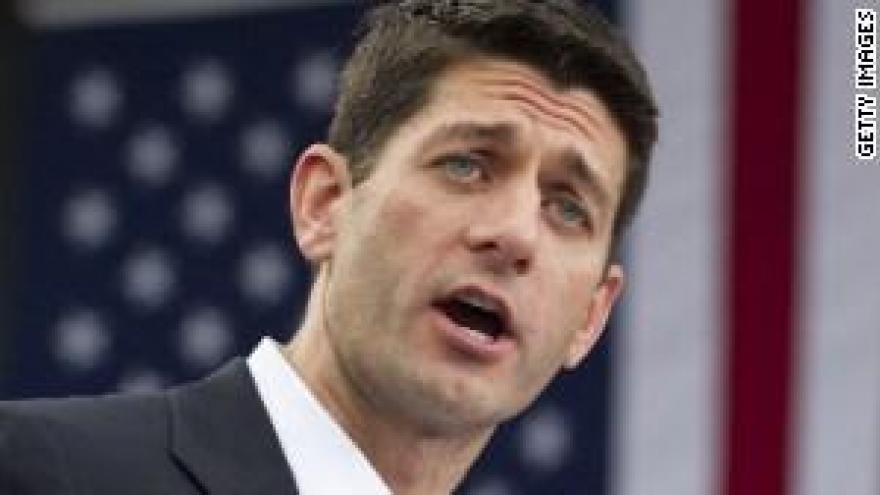 Washington (CNN) Rep. Paul Ryan has repeatedly indicated he is not running for speaker of the House, even as heavy hitters — including retiring Speaker John Boehner -- urge him to reconsider.

But Thursday night, it looked like Ryan may be changing his tune.

Speaking to a gaggle of reporters for three-and-a-half minutes, Ryan repeatedly refused to rule out a run, repeating over and over: "I've got no news for you."

He repeated that sentiment Friday morning with reporter staking out his office, saying: "I've got nothing to add, nothing to say."

The reason for the questions: Ryan's repeated previous denials haven't dissuaded anyone from asking him about the top job.

As the shock of Kevin McCarthy's decision not to seek the top job wore off Thursday afternoon, eyes turned to Ryan, the former vice presidential nominee and chairman of the Ways and Means Committee. Influential and well-respected throughout the GOP caucus, Ryan could be a peacemaker between the warring factions.

News that Ryan cleared his schedule and canceled fundraisers only added to the chatter he could change his mind. A source close to Ryan told CNN he is still a hard no on running, and simply didn't want to raise money at this "frantic time."

Along with Boehner, Deputy Majority Whip Tom Cole, R-Oklahoma, and Rep. Devin Nunes, R-California, are also personally encouraging Ryan to change his mind. Both said Ryan is the clear choice to unite the party -- and Cole said Boehner is well aware of that. Both are moderate Republicans in the inner circle of current leadership, including Boehner.

Boehner and Ryan have a long relationship: Ryan volunteered for Boehner's campaign when he was a student at Miami University in Ohio in the 1990s, before launching his own political career. But Boehner has not publicly called on Ryan to replace him.

"Nobody cares more about this institution and this conference than John Boehner does, and I suspect he knows better than any of the rest of us, the best choice is Paul Ryan, so I'm sure he would be doing whatever he can, but he has not told me he's doing that," Cole said. "But look, they're pretty close."

Cole added on Friday morning that he thinks Ryan will ultimately relent.

"I think eventually Paul Ryan will get into this thing, I really do," Cole said on MSNBC's "Morning Joe." "I think we've had two guys fall on their swords for the good of the conference, in this case it's hard not to step up when there's an overwhelming demand."

And for good measure, he added an appeal to Ryan's sense of duty.

The full GOP conference is scheduled to meet Friday morning on Capitol Hill. Ryan may be the subject on everyone's minds.

This doesn't mean Ryan is a sure bet, even if he runs.

Multiple House Republican sources tell CNN that while Ryan is popular among members,he faces many of the same problems that McCarthy had going into Thursday's election. Conservatives praise many of his policy positions, but are already warning Ryan would need to agree to a series of demands to change House rules and agree to their policy agenda.

But some House GOP members are still not taking Ryan's no for an answer.

"If we were to make the case to Paul Ryan that 'the country needs you and you were to have unanimous support of your conference,' it's a hard case to say no. I understand he's doing the right thing for his family but two weeks from now it could look very different," Florida GOP Rep. David Jolly told CNN.

Jolly added 'it's going to be a tough week or two" for Ryan because he expected the pressure to mount for him to change his mind.

Cole said on Thursday that "not a lot" in his conversations with Ryan have led him to believe he'll run, but said that there were others "much more persuasive" than him also engaging in the effort.

Other names that he said could be viable if Ryan stands firm, Cole said, include Minnesota Rep. John Kline and Georgia Reps. Lynn Westmoreland and Tom Price. Westmoreland told CNN he was considering it. And Cole's own name has been floated by his peers -- something he wouldn't rule out, though he said there were "better" options than himself.

Nunes, however, told reporters that Ryan is the party's only hope.

"He's really the only viable -- he's really the only one that can do the job," the House Intelligence Committee chairman told reporters. "I think it's tough. Everybody's eligible, but in terms of who can do the job and lead us into the next election cycle, we have to have a top-tier candidate, and really from the start of this, Kevin and Paul were the only two that we had at that caliber."

Ryan's name was also floated by Rep. Lee Zeldin, R-New York, who said he was part of the effort to recruit South Carolina Rep. Trey Gowdy as a conservative member of leadership. But he noted that his efforts were unsuccessful, and that seems to be the case of the best candidates.

"I was part of the effort to encourage Chairman Gowdy to consider a leadership run -- Chairman (Jeb) Hensarling, Chairman Ryan, a lot of names are being discussed ... but as names are mentioned, you hear statements of people taking their names out of the running," Zeldin said.

Cole acknowledged that Ryan has valid reasons not to run, including a young family and a commitment to the arcane policy fights in Washington from his perch atop Ways and Means and previously the Budget Committee.

But he added that he's let Ryan know that he's ready for his leadership -- and he hopes the Ways and Means chairman will see the light.

"I said (to Ryan), 'Colonel, if you're running, sign me up,' and he hasn't made any final decisions," Cole said. "It would be a great sacrifice on his part, I hope he's willing to make it."