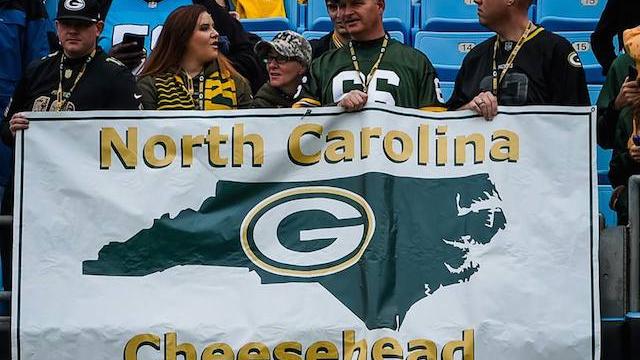 As Carolina Panthers quarterback Cam Newton was warming up for Sunday’s game against the Packers he spotted a Packers banner which read “North Carolina Cheesehead” hanging near the field.

When asked about the incident after the game Newton said, “it was a Green Bay banner in Bank of America Stadium. It just doesn't match. No disrespect to any Green Bay Packer. There, it's just a respect thing. You know we played in Green Bay last year, and I didn't see no ‘this is Panther Country’ signs in their stadium. You're not about to sit up here and sell a Whopper at no McDonald's, know what I'm sayin?”

As stated on their website, Bank of America stadium prohibits banners or flags in support of visiting teams.

No banners or flags expressing support of visiting teams may be affixed to or displayed on any surface. Hand held signs or posters that are in compliance with the balance of this policy are acceptable.

According to the Fayetteville Observer, Dobs spent $3,800 on tickers for the game and reported Cam to police for stolen property.

The Observer says the Panthers will make up the loss of the banner to Dobs.