Calls for Bears coach to be fired after Packers rout 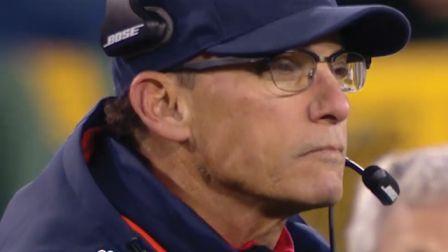 It was a night for Bears fans to bury their heads in some deep dish pizza. On the back of an NFL record-setting first half for Aaron Rodgers, the Packers trounced Chicago 55-14 Sunday night in Green Bay. Now, Bears fans and some sports writers have taken to social media en masse to demand a change in leadership south of the border.

Chicago Tribune sports writer Steve Rosenbloom published a piece after the game headlined with the simple question, \"Why wasn't Marc Trestman fired at halftime?\" The article links to a web poll that shows nearly 70% of respondents want Trestman fired either \"right now\" or \"30 minutes ago.\" The online poll is hardly scientific but could reveal a growing desire for change in Chicago after Bears fans began the season with high hopes. The Chicago Bears fan section on the popular social media site Reddit is full of comments demanding the Bears fire \"everyone.\"  (Be careful, some of the language Bears fans are using over there is a little unsafe for the office.)

After the game, a dejected Trestman told reporters \"we're not a very good football team, obviously.\" Both the Packers and Bears were coming off a bye week, meaning both teams had ample time for rest and preparation. The 42 points the Bears defense allowed in the first half was a franchise-worst for Chicago.

On the other side of the ball, Aaron Rodgers' first half performance was the best from any Packer of all time.  Rodgers threw 6 touchdown passes before the game reached halftime, a feat only ever matched by Oakland Raiders quarterback Daryl Lamonica in 1969.

After the game Rodgers said the key for the Packers was the play of Green Bay's offensive line and that his offense was able to \"cash in on opportunities.\"

The Packers have another game in front of a national television audience ahead of them next week when the Philadelphia Eagles come to Lambeau Field.  Kickoff time for that game is at 3:25 PM CDT.