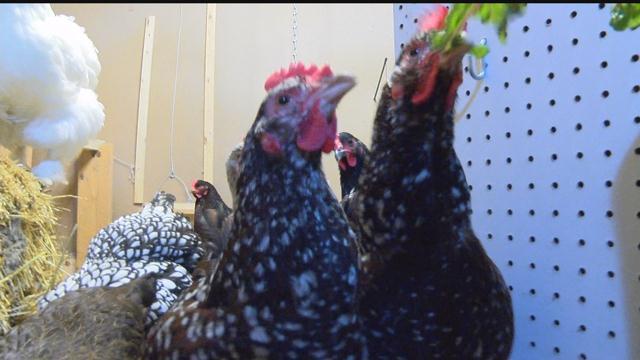 A woman says the Village of Caledonia forced her to give up her 11 chickens Sunday night. Village officials told her it was against the law to have them. But just a few blocks from her home, it is legal, in Racine, which is why the woman is putting up a fight.

It might look like a normal shed to you, but its actually a chicken coop and what's inside has got people clucking.

"That's what seems so outrageous. If I lived in a more populated area I could have them," said Cindy Pradarelli.

Every day since they hatched in spring Cindy Pradarelli 's priority has been these chicks. Eleven chickens, meticulously cared for by Cindy and her husband Ron in a coop that looks more like a dollhouse.

"My girls live a life of luxury. We have padding under the linoleum floor, heat lamps come on and keep them nice and toasty and I have a video camera where I can watch the girls from inside the house," said Cindy.

Now to some, these might be just chickens, but to Cindy, these are her girls; they each have a name and a special place in her heart.

"They're just fun to talk to after you've had a stressful day at work," she said.

"You only need two acres to raise a cow,a  horse, a sheep or goat. But you need five acres for a chicken. I think that's a little unrealistic," said Cindy.

Cindy also says she hasn't heard a peep from her closest neighbors.

"They like my chickens very much. One neighbor helped name the girls. They both told me they feed the chickens," she said.

She does say there is one neighbor down the street who has an issue with the birds. So Cindy wrote multiple letters to the village board proposing a change to the ordinance.

They told her they'll be taking up the issue again in a January 4th meeting.

We reached out to Village Board President Bob Bradley for comment, but didn't hear back.

"Caledonia is rural. It just seems logical," she said.

And as for her chickens: they will be kept on a farm until their fate is decided in Caledonia. Meanwhile, Cindy is encouraging residents to write letters expressing their feelings to the board trustees.