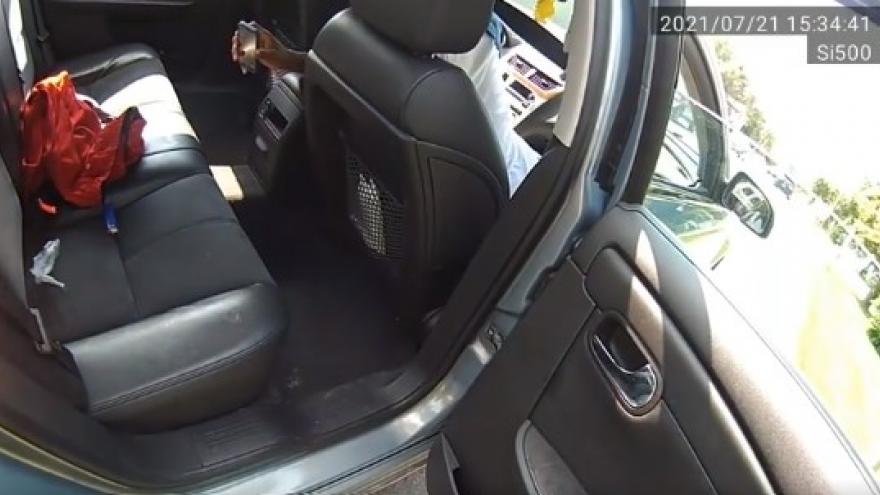 CALEDONIA, Wis. (CBS 58) -- A video of a traffic stop conducted by the Village of Caledonia Police Department in Caledonia, Wisconsin, went viral Saturday, July 24, over allegations by social media users that a police officer, featured in the video, placed a baggie in the backseat of the stopped vehicle.

Facebook user "La Savoo" posted a video of a traffic stop he experienced with Caledonia police.

"La Savoo" a native of Racine, according to the Facebook profile, videotapes a Caledonia police offer approach his vehicle before tossing an item  into the backseat of the car.

The following is part of the audio transcript from the viral video:

The officer is heard responding "What's what?"

La Savoo responded, "What you just threw in here. I got you on camera, bro."

"On 07-21-21 at about 3:22pm, officers conducted a traffic stop for a vehicle traveling 63 mph in a 45 mph zone. The vehicle was occupied by a driver along with front and rear passengers. The driver was identified by her driver’s license. The front passenger lawfully declined to identify himself. The rear passengers were not wearing their seat-belts and were asked to identify themselves.

The empty corner tear was turned over by the searching officer to another officer who was on scene. That officer turned it over to the officer who is seen on video. Since there were NO DRUGS in the corner tear, the officers discarded the empty packaging material in the vehicle. This is what was observed in the video.

The front seat passenger tells the officer that his actions are on video, and the officer replies that he is also recording the incident. The officer acknowledges to the front seat passenger that he (officer) put the item there and explains that it was taken from one of the passengers and the officer did not want to “hold on to it.” Essentially, he appears to be discarding the empty baggie. While we would discourage officers from discarding items into a citizen’s vehicle, the video is clear that the officer is NOT planting evidence or doing anything illegal. Additionally, the empty corner tear is not itself illegal.

No arrests were made as a result of this incident. The only arrest/citation arising from this incident was a speeding citation issued to the driver.

While this is only a summary of the events, the origin of the empty corner tear and the circumstances under which it was placed in the vehicle are supported by body worn camera video.

Attached are two video clips (see comments for second video).
There are two separate clips because they are from different officer’s body worn cameras.

Since four officers were present on scene, the body worn camera footage and squad camera footage totals in excess of 6 hours of video. We are still in the process of reviewing the videos. All videos, in their entirety, will be released in the very near future.

Also in the post, police say they pulled the car over for speeding 63 mph in a 45 mph zone.

CBS 58 News contacted "La Savoo" for information but could not be reached for comment.

Caledonia Police said the incident is still under internal review.

No statement has been made by Caledonia police on if the officer is still on duty while the internal review is being conducted.