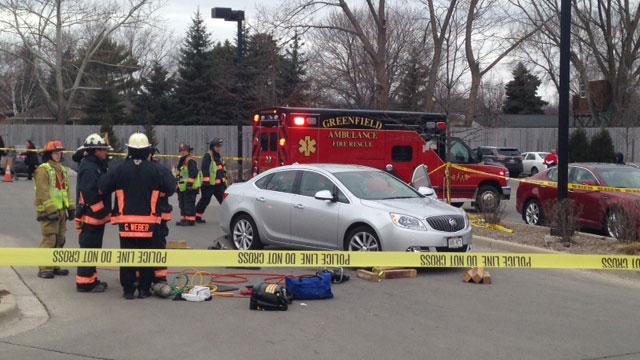 A bystander and an on-duty Greenfield Fire Fighter were first to respond to rescue a Greenfield woman who was trapped underneath a car.

Greenfield Police and Fire Departments responded to the Pick 'n Save Store at 76th and Cold Spring for a report of a pedestrian that was struck by a vehicle and trapped under it on Friday afternoon.

The pedestrian, a 28-year-old woman, is Greenfield resident and an employee of the Pick 'n Save store.

According to the Greenfield Police Department, an on-duty Greenfield Fire Fighter was at the store, responded and attended to the pedestrian.

A bystander obtained a car jacket and helped to raise the vehicle off the pedestrian. The pedestrian was freed from under the vehicle by the Greenfield Fire Department and was transported to Froedtert Hospital in critical condition.

The driver, an 80 year old woman from Milwaukee, remained on scene and is cooperating with the investigation. The driver was leaving the store, completing a turn traveling toward the South 76th Street exit when she struck the pedestrian, who was walking toward the store. The pedestrian fell to the ground with the vehicle driving over her. The pedestrian ended up being trapped under the vehicle.
Wisconsin State Patrol was requested and is assisting with investigation and reconstructing the accident scene.
Speed and impairment do not appear to be factors in this accident which remains under investigation by the Greenfield Police Department.

At this time, we know that a female employee at our Pick ‘n Save store near 76th and Cold Spring was struck by a vehicle in the store parking lot.  She is being treated by medical personnel.  The investigation is ongoing, and Roundy’s is working closely with Greenfield police.  We take the safety of our patrons and employees very seriously. We have no further details to release at this time.   All additional information will come from the Greenfield police department.