Bush weighs in on 'multiculturalism' 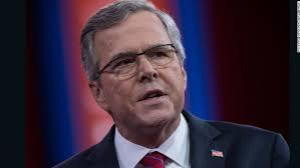 Cedar Falls, Iowa (CNN) Jeb Bush argued Tuesday that the United States is "creeping toward multiculturalism" and described it as "the wrong approach."

His answer came in response to a question at an Iowa diner Tuesday from a woman who wanted to know how the former Florida governor would help refugees and immigrants integrate into U.S. society and "empower them to become Americans."

"We should not have a multicultural society," the Republican presidential candidate responded.

But Bush, who's a self-admitted policy wonk and tends to use nuanced language, was referring to "multicultural" in the literal sense -- a social model in which cultures live in "isolated pockets," as he described them, rather than assimilating into society.

"America is so much better than every other country because of the values that people share -- it defines our national identity. Not race or ethnicity, not where you come from," he said. "When you create pockets of isolation -- and in some cases the assimilation process is retarded because it's slowed down -- it's wrong. It limits peoples' aspirations."

He added that people who aren't "fully engaged" in a broader community will struggle to get the best education and argued that learning English would better accelerate access to opportunities.

"We need to get back to that. We're creeping towards multiculturalism and it's the wrong approach," he said.

Answering another question from the same woman, Bush said he agreed that the federal government should help fund assimilation efforts in communities.

The Democratic group American Bridge, however, pounced on the comments, blasting out video of the exchange and knocking Bush for appearing to denounce "multiculturalism" in the more commonly known sense of tolerance for other cultures.

Bush is "now tacking hard to the right," the group said in an email blast to reporters, and described the comment as an effort to mimic inflammatory language about minorities by other Republican presidential candidates, like GOP front-runner Donald Trump and retired neurosurgeon Ben Carson.

But Bush, who's fluent in Spanish and lives in Miami, has made cultural diversity a key staple in his campaign. He routinely talks about his wife, who's from Mexico, and the "bicultural" children that they've raised together. On Monday, while addressing the Hispanic Chamber of Commerce in Houston, Bush lauded the country's mixture of cultural backgrounds, saying the immigrant experience adds a "vitality that is different and unique and extraordinary for our country."

Still, Bush argues that immigrants who are in the country illegally can only earn legal status if they take steps toward assimilation, like learning English and American civics.

The multiculturalism vs. assimilation debate has especially been prevalent in Europe. In his first speech as prime minister in 2011, for example, David Cameron assailed multiculturalism as a failed model and called for a more united national identity.