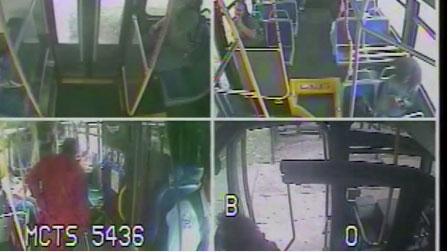 A Milwaukee County Transit System driver comforted and helped 15-year-old girl escape from a man who was harassing and following her.

According to MCTS, Sharon Chambers was about to pull away from a stop at Sherman Boulevard & Silver Spring Road on Monday morning when she noticed a girl waving in her direction.

“I thought she was just running to catch the bus, but as she walked in front of the bus I noticed she was crying,” Chambers said. “I told her to get on the bus and let her know no one was going to mess with her on my bus.”

Chambers drove away from the area in case the man was still following the girl. She then followed her training and protocol by calling into MCTS Dispatch, who notified Milwaukee Police. Chambers drove to 51st & Silver Spring Road to meet police and MCTS staff.

As they were waiting for police to arrive, Chambers called the girls Grandmother to let her know what happened and comforted the girl, telling her,“Don’t worry about it. You are safe. I will fight for you; no one is going to hurt you.”

“Sharon Chambers is a wonderful example of how even small acts of kindness and compassion can have a large impact. Sharon, and all the other hardworking employees at MCTS and Milwaukee County, make me proud to live in Milwaukee and serve as County Executive. Thank you, Sharon,” said County Executive Chris Abele.

Chambers has worked for 12 years as a driver.