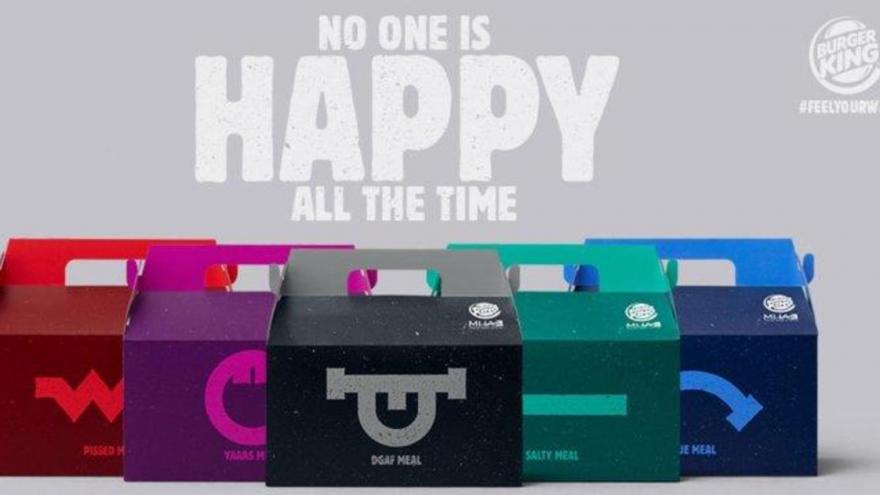 Burger King is coming for McDonald's Happy Meals in an unexpected way. According to a press release, the fast-food chain introduced "Real Meals" on Thursday, to celebrate "being yourself and feeling however you want to feel."

The #FeelYourWay boxes come with a full-sized Whopper combo meal, which includes fries and a shake, but no toy. They are rolling out in a few major U.S. cities, including Seattle, New York, Los Angeles, Austin and Miami.

The initiative isn't just a jab at McDonald's — it's in collaboration with the organization Mental Health America to raise awareness for Mental Health Month, which takes place during May. "While not everyone would think about pairing fast food and mental health, MHA believes in elevating the conversation in all communities in order to address mental illness Before Stage 4," said Paul Gionfriddo, president and CEO of MHA.

Stage 4 refers to the stage with the highest severity of symptoms of mental illness, which MHA describes as persistent, severe and life-threatening. MHA's Before Stage 4 campaign works to address mental health issues before they reach that point.

Burger King released a commercial to coincide with the new boxes, in which several people having various kinds of bad days admit that it's OK to not be OK all the time. The ad swaps Burger King's iconic "Have it your way" slogan with "Feel your way."

Brand marketers — especially fast-food companies like Wendy's and Denny's — have latched onto anxiety and depression as marketing "trends" in recent years, attempting to appear relatable to millennials and Gen Z. The announcement tweet even referenced a popular meme — "not sure who needed to hear this today, but it's ok not to be happy all the time. All that matters is that you #FeelYourWay."

not sure who needed to hear this today, but it’s ok not to be happy all the time. all that matters is that you #FeelYourWay. https://t.co/vPmy1sT0cCpic.twitter.com/XmF0GvMjCg

While many are praising a partnership that supports destigmatizing mental health issues, some are disappointed that Burger King doesn't do more to support its own employees.

"This tweet has me feeling a type of way because when [I] was an assistant manager at BK I was so overworked and stressed that I cried in the walk in multiple times...bring this energy to your regional managers, smaller franchise owners and your employees," a former employee tweeted.