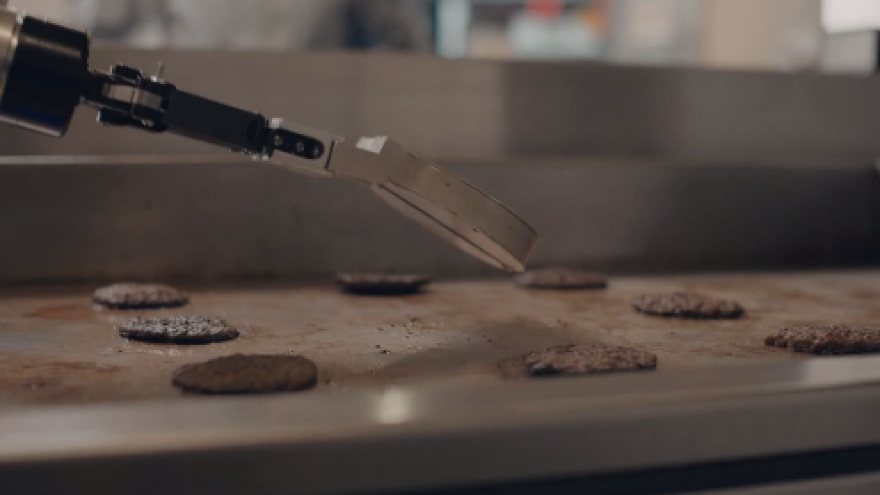 CBS Local — As fast food employees across the U.S. continue to protest for higher wages, a California chain restaurant has decided to hire a new staff member that works for free. The competition for the company’s low-wage workers: a burger-flipping robot named “Flippy.”

CaliBurger has announced they will be installing the high-tech replacement in 50 of their locations around the world. “Flippy,” the robotic kitchen assistant, was created by a California startup company called Miso Robotics and is expected to roll out in 2018.

“We are excited about the impact Miso’s AI-based solutions will have for the restaurant industry,” Miso’s David Zito said. The CEO added that their creation will likely push workers out of their current jobs.

“Humans will always play a very critical role in the hospitality side of the business… We just don’t know what the new roles will be yet in the industry.”

Ironically, the futuristic short-order cook has been developed to replace workers in one of the most progressive states in America. Several California cities have already raised the minimum wage as the state plans to push the rate to $15 by 2022.

“This wage is not sustainable for a lot of companies… in that $5 increase, you’re talking about $12,000 increase per employee… where does that money come from,” warned Peter Tateishi of the Sacramento Metro Chamber.

The founder of CaliBurger appears to agree with the cost-saving strategy. At a restaurant franchising summit in London, Cali Group CEO John Miller envisioned his chain operating with no kitchen employees at all.

“The kitchen can be entirely automated,” Miller said. “We really think of ourselves as a technology company that happens to sell cheeseburgers,” he added.

According to the Bureau of Labor Statistics, the median pay for the nearly five million U.S. fast food employees in 2016 was $9.44. As “Flippy” lands in kitchens across America in 2018, workers may face a new challenge in their “fight for $15.”