Building facade collapses and other weather related damage in Racine 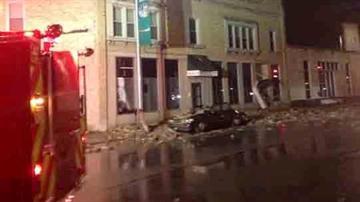 RACINE - The facade on the top of a building on Washington Avenue came crashing to the ground early Sunday night and it's believed the strong weather is to blame. Heavy rain was falling and there were very strong winds at the time. The debris destroyed a car on the sidewalk. Mark Quinn says he and his family were in that car shortly before the tons of bricks fell on top of it. Quinn says the sound of the collapse was terrifying. That section of Washington Avenue is very busy, but it's expected to be closed for several days because of this incident. On Pierce Boulevard, the powerful weather knocked down a portion of a tree near Brenda Spaulding's home. A large branch came through the roof and into her kitchen. Spaulding says she and her mother were in the kitchen less than 5 seconds before. She feels grateful no one was hurt. On South Street, strong winds knocked down some power lines. Utility workers spent hours Sunday night repairing them.