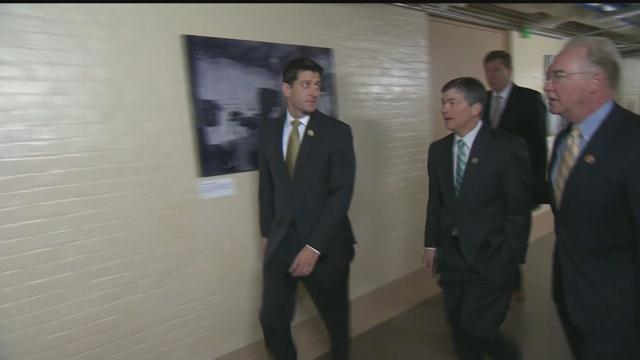 (CNN)Congressional leaders and the White House reached a major deal Monday to avoid a potential fiscal calamity, but not before many Republicans were left fuming that their party leadership had given too much away to their Democratic adversaries.

The agreement, which would raise domestic and defense spending by $80 billion and lift the national borrowing limit until March 2017, could be voted on by the House as soon as Wednesday -- the same day the GOP is expected to nominate Rep. Paul Ryan, R-Wisconsin, to replace retiring Rep. John Boehner, R-Ohio, as House speaker. The deal prompted a tense session among House Republicans Monday night in the basement of the Capitol.

The final details were still being ironed out late into the night Monday, including cuts to the Social Security disability program and to Medicare. But the deal was the product of weeks of negotiations led by Boehner, who is furiously trying to take the divisive fiscal issues off the plate for Ryan before his successor takes office. If the deal passes, Ryan could have a clear path to do his job without the fiscal brinksmanship that damaged Boehner's speakership.

Still, the private talks and the frantic effort to push the measure into law only prompted sharp criticism from many House and Senate Republicans, who contended that Boehner gave away too much in the name of getting a deal.

"We're not just here to take commands," Amash said. "People back home expect us to participate in the process. I hope that Paul Ryan will let us know how he feels about the process."

Ryan, who is the chairman of the House Ways and Means Committee, deliberately took a low profile and refused to weigh in on the deal, declining to comment to reporters and not saying a word about it during a private meeting with fellow House Republicans.

At that meeting, however, the tension was rife.

Louisiana Republican Rep. John Fleming told reporters Boehner essentially "threw committee chairmen under the bus" and suggested this big deal was being dropped on members now because the committees failed to do their work.

But, in Fleming's telling, House Budget Committee Chairman Tom Price, R-Georgia, pushed back, saying that he was in fact working on fiscal reforms but was told by leadership to stand down.

Roughly 10 House conservatives got up and complained in the meeting about the process of cutting a major deal and rushing it to the floor without going through regular order, lawmakers said.

Rep. Walter Jones, a conservative from North Carolina, said he still was waiting on the details -- but added that he "would not be blackmailed" into voting for a debt limit increase.

Across the Capitol, the complaints were just as sharp.

Sen. Tim Scott of South Carolina said, "It's too early to tell (but) I'm leaning no" on the budget deal.

"I'm not necessarily in a position where I think it's in the best interest of our country," he said.

Senate GOP Whip John Cornyn, the No. 2 in his conference, added: "It's a mixed bag, there is no question about it. I don't think you'll hear anybody popping any champagne corks."

While there is consternation in the ranks, many expect there will still be ample support from Democrats -- and a large enough number of Republicans -- to pass the deal later this week. That's largely because the bill would increase defense spending to alleviate the pain felt by across-the-board spending cuts known as sequestration, enough to win the backing of the sizable number of GOP defense hawks.

But Sen. John McCain says he will support the deal, even though it is $5 billion short on defense funding in 2016 and more than that in 2017.

"I think it is saleable," he told reporters after leaving a Senate GOP Conference meeting.

Even though Ryan's fingerprints aren't on the deal -- a deliberate move by the presumptive speaker and Boehner -- the framework of the agreement is very similar to the two-year budget deal he crafted in 2013 when he chaired the budget panel with his Democratic counterpart, Sen. Patty Murray, D-Washington.

The new spending under the accord would be offset by sales from the strategic petroleum oil reserve, use of public airwaves for telecommunications companies and changes to the crop insurance program — among other measures.

Moreover, the deal would spread out increases in Medicare premiums over time so beneficiaries don't feel them acutely. It would extend the 2% cuts scheduled for Medicare to extend an additional year.

It would also overhaul the Social Security disability trust fund in an attempt to prevent a 20% reduction in cuts to benefits. The $5 billion in savings would come from redistributing payroll benefits, not cutting them, sources said.

The plan includes more money for the Pentagon's overseas contingency account, and it would repeal a provision in Obamacare forcing workers to automatically enroll in employer-sponsored health care.

Despite the GOP concerns, if Pelosi agrees to back the package, and Boehner can deliver a large segment of his conference, it could be enough to overcome opposition from conservative factions.

Rep. Richard Hudson, R-North Carolina, said that "big broad strokes" were presented to members Monday night "that all sounded wonderful and maybe even too good to be true."

Indeed, many GOP lawmakers in both sides of the Capitol were disappointed that party leaders couldn't get more from the White House by making such a huge concession -- to raise the national debt limit for longer than a year -- especially since this issue has been so contentious during Boehner's nearly five years as speaker.

"I have some concerns," said Sen. Rob Portman, R-Ohio. "You hope that in a debt limit context that you actually reduce spending. That's the idea to -- as you raise the debt limit, deal with the underlying debt crisis that we have."

But the deal may ultimately pass because lawmakers realize they have little choice as they stare at a potential default next week.

"It's better than no deal at all," said Sen. Johnny Isakson, R-Georgia.

"Opportunity to get out:" Golf courses across Wisconsin open as extended 'Safer at Home' order goes into effect