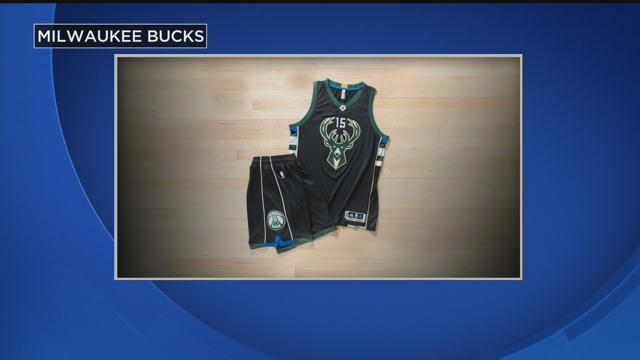 The Milwaukee Bucks announced the debut of “Fear the Deer” nights for the 2015-16 season, highlighted by the unveiling of new alternate uniform and court designs that will be showcased at four games this season. The Fear the Deer uniforms and court were revealed as part of today’s third annual Bucks Fan Fest, presented by Pick ‘n Save, at the BMO Harris Bradley Center.

“We’re always looking for ways to be innovative as an organization, and our new Fear the Deer nights are another example of how we’re continuing to build world-class experiences for our fans,” Bucks President Peter Feigin said. “The Fear the Deer uniforms and first-ever alternate court are a unique way to celebrate the new attitude of Bucks basketball, and an exciting showcase for our young, talented team.”

The new Fear the Dear platform strips away the periphery of the Bucks brand, leaving the focus squarely on the team and setting a simple, aggressive tone. The new uniforms have been stripped of their base color and traditional front wordmark, leaving just the imposing new Bucks logo on a black backdrop. The shorts similarly feature a scaled down version of Milwaukee’s new secondary logo, with the elemental pieces of the basketball and stylized “M” adorning the sides.

With the addition of a second court, the Bucks are now the first team in the NBA to feature an alternate court design to complement the alternate uniform. The Fear the Deer court shares the same design philosophy as the new uniforms, with the logos and color palette stripped down to keep the focus squarely on the team.

Milwaukee’s “Fear the Deer” uniforms and court will be on display at four home games this season, creating a fan experience unique to Milwaukee as the Bucks battle some of the league’s best: Dec. 9 vs. the L.A. Clippers, Jan. 12 vs. Chicago, Feb. 22 vs. the L.A. Lakers and March 6 vs. Oklahoma City. For a limited time, fans can secure their seats for all four of these unique nights through the “Fear the Deer” ticket package, available in select seating locations starting at $215 for the four-game series.