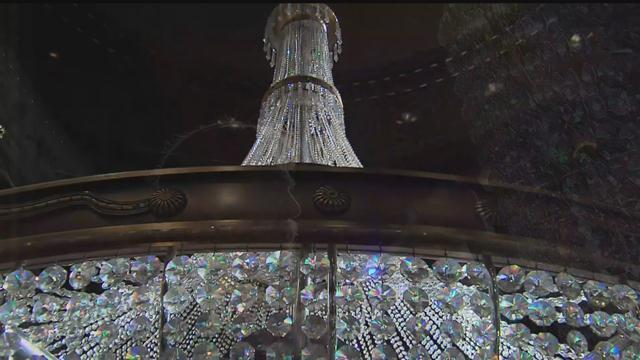 The giant chandelier that hangs high above the auditorium at the Pabst is brought down to ground level only once a year for its annual cleaning and polishing. Each of its 33,000 crystals are cleaned and polished by hand over a two-day period.

CBS 58 was there Tuesday as the chandelier was dropped using the original metal hand crank located in the attic.

The 1.23-ton chandelier must be manually lowered 68 feet to floor level.

Cleaning and polishing by a group of ushers and volunteers will take place over the next two days.

Built in 1895 by beer baron, Captain Frederick Pabst, the Pabst Theater is the fourth oldest active theater in the United States and is a National Historic Landmark. Designed by German architect Otto Strack in the tradition of the great European opera houses, it was also a technological marvel of its day, being the first theater to be equipped with both electricity and air conditioning. Many famous leaders and entertainers graced the stage in the first half of its history including Winston Churchill, the original Von Trapp family, W.C. Fields, Katherine Hepburn and hosted Liberace's first concert.

However, in the early 1970s, it was called for demolition due to the fact of its "inability to hold a sustainable business" and nearly became a parking lot for City Hall across the street. Milwaukee's Mayor Henry Meier and his wife fought against the anti-preservation movement of the 70s and saved the theater. In 1976 it went through a 2.5 million restoration and the now famous chandelier was installed, weighing 2.3 tons and containing 33,000 Austrian crystals.

Nonetheless, again in the early 2000s, the Pabst Theater had to fight for its life as it struggled for three decades to draw consistent talent and crowds. Believing in the building's potential, philanthropist Michael Cudahy purchased the building from the City of Milwaukee in 2002, once again saving it from destruction, with the promise of preserving the 1895 landmark structure and relieving the city of its operating and maintenance costs.

Michael Cudahy hired Gary Witt and ushered in a whole new era. The "Grand Ol' Lady" has never been as busy as she is right now hosting over 150 events per year. Over the last decade, millions of people from all over the world have attended events at the Pabst Theater to see such acts as Jim Gaffigan, Bon Iver, Louis CK, Wilco, David Byrne, Steve Martin, Alabama Shakes, and Dave Chappelle.