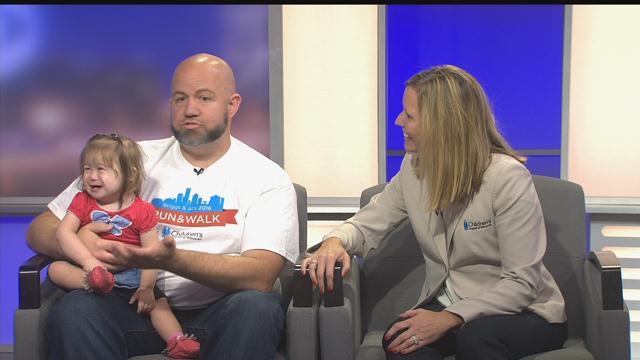 One of the largest and longest running fundraising events in Wisconsin, Briggs & Al’s Run, is back for another great year on Saturday, September 17.

In it's 38-years, the event has raised more than $18 million, which has benefited countless children and families who are served by Children’s Hospital.

Live on the CBS 58 News at Four, we were introduced to a family who is helped by Briggs & Al's Run. Matt Poeppel, brought his bubbly and talkative daughter Lakelyn with him. "We were involved with Children's when (Lakelyn) was still in utero," Poeppel said, "they found a heart defect when she was 24-weeks old."

And for nearly half of her first year, Lakelyn dealt with numerous cardio/pulmonary issues that required three heart surgeries to resolve. She is currently part of the Special Needs Program and is under the care of many departments at the hospital. "We are now at 20-months. We are happy, we're healthy and we're thriving now, and it's all thanks to the group at Children's," Poeppel said.

Meg Nelson, President of Children’s Hospital of Wisconsin’s Foundation, also joined us to talk about the 5K run/walk, which goes from the Marquette campus to the Summerfest grounds. "The wheelchair race is at 10:15 am, 10:30 am is when runners go off, and the walkers are right behind them," Nelson said.

Registration starts at 8:30am, and walk-ups are welcome on the day of the event. Event registration, the course, parking, and other information can be found here.